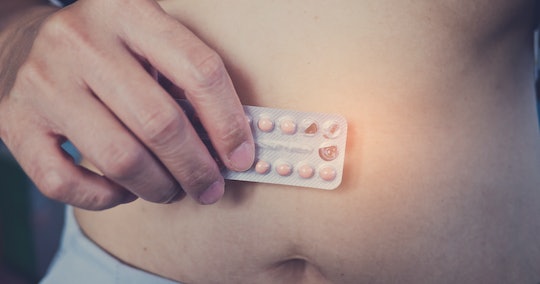 Whether you have a snoozing newborn in the next room or a crying toddler having a meltdown about the wrong sippy cup, birth control is a big consideration when you've got a little one at home. One wrong move and you could find yourself cooking yet another one of those little ones before you're quite ready! So you've likely asked yourself, is birth control less effective after pregnancy? Well, it depends on which method of birth control you use, but the answer to that is mixed.

There are a lot of different kinds of birth control, from barrier methods like condoms and diaphragms to hormonal birth control like IUDs, the pill and the ring. The most definitive answer to the question of birth control efficacy after pregnancy is found with the diaphragm. Without a doubt, you'll need to be fitted for a new diaphragm after you give birth as your vagina will likely have changed in size ever so slightly. And even if it has changed just a tiny bit, that's likely enough room for a single sperm to sneak through and fertilize an egg!

Hormonal birth control and other barrier methods that have nothing to do with changes in the size of your vagina shouldn't be affected by pregnancy. However, you'll want to keep in mind that some birth control methods need at least one cycle in order to be effective. The pill, for instance, often needs a full cycle before it can be fully effective in preventing pregnancy.

You'll also want to keep in mind that after you give birth, you can ovulate even before you have your first period. So even if you think your reproductive system isn't back to normal yet, think again and use protection in order to prevent an unwanted pregnancy.

Parents.com suggests that pregnant mothers start thinking about their postpartum birth control even before they give birth because some methods will need to be started fairly quickly after giving birth. In addition, some methods aren't suitable for breastfeeding mothers, so if you plan to breastfeed you might want to take extra care in choosing a postpartum birth control method. For example, some hormonal birth control methods include higher doses of estrogen might be passed along to your baby if you are breastfeeding and can also affect your milk supply.

As What To Expect explains, having a good idea about how soon you want to continue to grow your family can give you a good idea about which birth control method is best for you. If you know you are finished having a family, something like an IUD or even tubal ligation can be a good option. If you think you'd like to grow your family in the next few years but not immediately, you'll probably want to get a head start on which kind of birth control you'll be using!