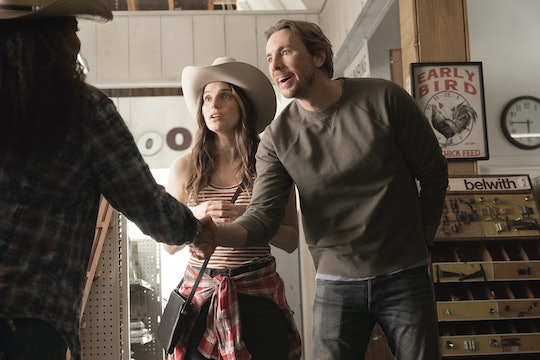 In A World's Lake Bell is returning to network TV in a splashy new ABC sitcom called Bless This Mess, also starring the likes of Dax Shepard and Pam Grier. But viewers tuning into the Green Acres-esque series may be wondering: is Bless This Mess based on a true story? According to The Daily Beast, the show's executive producers had to convince Grier, a real-life farmer, of their rural chops in order for her to agree to do the show.

The series is co-created by Bell and New Girl creator Elizabeth Meriwether, but it's a totally fictional tale. At a TCA panel in February, the cast and producers were asked to "pitch their country cred," according to Deadline, and Meriwether admitted that she grew up in Chicago and had driven through Nebraska, where the series is set, many times. But the writers' room is stacked with staffers from Ohio, Illinois, and Wisconsin, according to The Daily Beast, so they have plenty of first-hand experience in the room. Grier said she was particularly impressed by the realistic details of Nebraska farm life infused into the script, down to the show's central couple planting alfalfa, one of Nebraska's top crops. Plus, Meriwether successfully helmed a show about a woman from Ann Arbor, Michigan with New Girl, so she does have some experience capturing the heartland.

Bless This Mess follows a newlywed couple named Rio (played by Bell) and Mike (played by Shepard) as they make the big decision to quit their jobs and leave their overwhelming city life in New York to pursue real wellness on a farm left to Mike by his dead aunt. Of course, farming is far from an easy, relaxed lifestyle and the pair soon realize they're in way over their heads — and more stressed out than ever.

The half-hour comedy was initially in the works at Fox, according to Variety, but following the Disney-Fox merger, it got a six-episode pick-up by ABC. Karey Burke, the new president of ABC Entertainment, told Variety of the series, "Bell and Shepard headline a stellar cast in this hilarious take on a classic fish-out-of-water story that we found irresistible."

At the TCA panel, the cast acknowledged the series' similarity to the late-'60s/early-'70s sitcom Green Acres, which is also about New York City socialites who buy a farm (and quickly become the butt of jokes amongst their small town neighbors). But with Instagram wellness culture and the rising tension between coastal elites and America's heartland, Bless This Mess is an ultra-modern take on the story.

"There’s always sort of fiery rhetoric between blue states and red states," Bell told The Daily Beast. "This is a show by no means can heal everything, but certainly it is very keen to illuminate what’s great about a small town community and what we might lack in the city sometimes."

Bell, who grew up in Manhattan and now lives in Los Angeles, obviously doesn't have much rural-living experience herself, but because of that, she plays the well-intentioned but totally clueless crunchy granola city-slicker with aplomb. Bless This Mess premieres Apr. 16 on ABC.