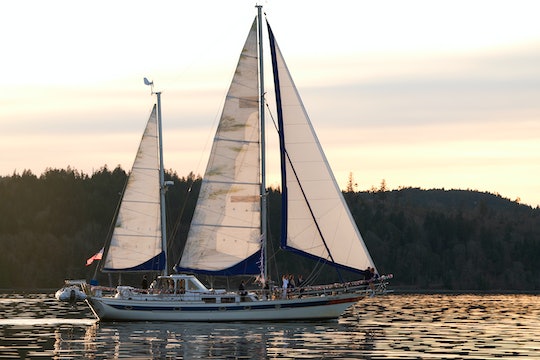 I'm a newbie to the world of Hallmark movies and until recently believed they were strictly entertainment for snowy nights. I was wrong. It turns out they're a great escape on a brisk spring evening, too. The channel's latest offering, Sailing Into Love got me wondering — is Blue Island a real place? If it is I want to go right now, so I did some digging.

The answer is a little bit more complicated than I was expecting. All of my research supports the sad fact that the town and island you're wondering about isn't real. Sailing Into Love was filmed in Victoria, British Columbia in Canada — which over the past several years has become a popular shooting location for TV series. For instance, popular teen melodrama Riverdale, is shot in Vancouver, another the Canadian city, though it is set in America.

But there is no state mentioned in the trailer for Sailing Into Love or in the synopsis. From all the information I can gather it looks like the Blue Island of the movie is entirely fictional. I guess I'll just sail to Claire's Bula Bay and the Blue Island in my mind. If I want to take a real vacation, there are places named Blue Island that I can visit, they just don't look exactly the same. There is a Blue Island in Illinois, or, if you're looking to get a little bit farther away, one of the islands in the Exuma Cays in the Bahamas is named Blue Island.

That's your answer, but let's refocus on the fake Blue Island that Claire and Tom are trying to save in the movie. Leah Renee, who plays Claire, wouldn't be surprised to learn that you needed to Google the island after watching the movie. "Blue Island is kind of like a character in itself in the film," she said in an interview on set. She continued, "And to Claire it represents everything. Her past, her life growing up, her memories of with her family and her childhood."

That's a lot of pressure. But I think Blue Island can handle it. It's full of history, but also quaint and calm and has an easy-going vibe to it. That is kind of similar to the filming experience Renee and Chris McNally — who plays Claire's love interest Tom — had. "Working with Leah is really great. She's super, super kind. I haven't heard her complain once," he said.

Why would Renee complain? McNally made falling in love on screen a breeze. "It's been really easy to have that good chemistry with [McNally] because he's really just a genuinely nice guy," she said. "And he's actually really shy and he's an introvert and those are my favorite kind of people, personally."

It sounds like a Hallmark Channel match made in heaven. Sailing Into Love airs May 18 at 9 p.m. ET as part of the network's Countdown To Summer movie series. Blue Island is a welcome third wheel in Claire and Tom's love story, but be careful you don't fall in love yourself. Remember, the Blue Island of your dreams doesn't exist.