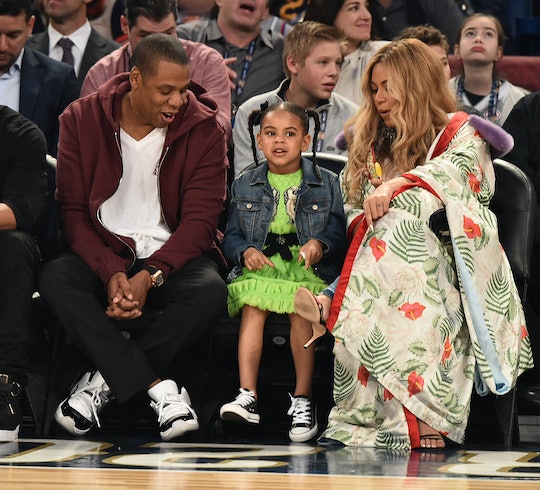 Turns Out, Beyonce's Twin's Aren't The Only Family Members With Trademarks

Any information surrounding Beyoncé and JAY-Z's twins has been as coveted as it's been rare. Which is why, of course, when TMZ broke the news that Beyoncé and JAY-Z reportedly named their new additions Rumi and Sir Carter, the internet lost its collective mind. The news broke as the result of a trademark request, leaving many fans asking themselves, "Is Blue Ivy trademarked?" Turns out, being born into the Knowles-Carter family comes with some major perks.

According to CNN, the power couple filed a petition to trademark Blue Ivy shortly after their first daughter was born in January 2012, "seeking to reserve it for use as a possible brand name for a line of baby-related products, including carriages, diaper bags, and baby cosmetics." There was a snafu in the process, however, when, according to CNN, Veronica Alexandra — who started an event and wedding planning company named Blue Ivy in 2009 — filed her own petition to trademark the name. The U.S. Patent and Trademark Office ruled in Feb. 20, 2012, that JAY-Z and Beyoncé could not trademark the name of their daughter, so Alexandra could continue to use the name for her event and wedding planning company, including any related marketing and advertising. Beyoncé and JAY-Z could, however, "can use the name for other potential business endeavors," according to CNN's report.

According to NY Daily News, Blue Ivy the company was founded three years before JAY-Z and Beyoncé welcomed their daughter, Blue Ivy, into the world. That didn't stop a second Knowles-Carter attempt to trademark the name Blue Ivy in 2017, when Blue Ivy the company was forced to submit court documents again in an effort to stop Beyoncé from "getting ownership of the name Blue Ivy Carter. According to TMZ, in 2017 Beyonce filed a second petition for copyright, again hoping to secure the name to sell a slew of products including "cosmetics, mobile devices, and video games." TMZ also reported that, according to the woman who owns Blue Ivy, the company, JAY-Z is "on record as saying they have no intention of actually selling any products. They're just trying to stop others from doing it."

As of May 11, 2017, shortly after Beyoncé announced her twin pregnancy via Instagram, the second trademark attempt has not been settled one way or the either.

So, for now and just like twins Rumi and Sir, big sister Blue Ivy will have to wait and see if her name will be trademarked. One thing is for certain, however: those three kids won't have to worry about a penny. Like, ever.

More Like This
Victoria Beckham Reflects On Being Forced To Weigh Herself On TV After Giving Birth
Meghan Markle Calls On Men "To Be Vocal" In The Aftermath Of Roe v. Wade Ending
Some Movie Theaters Are Banning Teens Dressed In Suits As Part Of Viral 'Minions' Trend
12 Of The Best Hallmark Christmas Movies To Watch In July