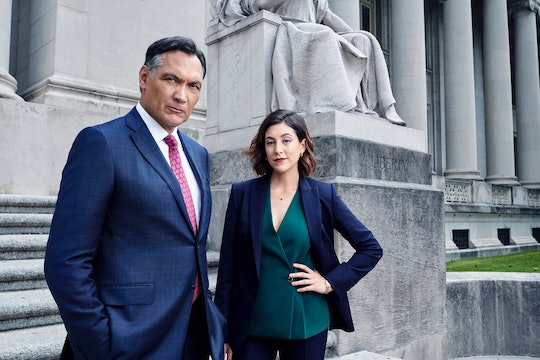 NBC's Bluff City Law follows a father and daughter legal team in Memphis who specialize in landmark civil rights cases. Father Elijah Strait (Jimmy Smits) is aided in this endeavor by his daughter Sydney (Caitlin McGee). They're dealing with important cases that definitely mirror many real life situations, but does that mean Bluff City Law is based on a true story?

There's no indication that Bluff City Law is based on real people. There doesn't appear to be a father and daughter living in Memphis who are fighting major legal battles together. But many of the cases are ripped from the headlines, which means the show ends up blending fact and fiction to bring realism to its stories. The characters appear to be entirely fictionalized, but the cases they become embroiled in might seem surprisingly familiar.

Procedurals that focus on law and lawbreaking often borrow from the headlines when crafting their stories; various Law & Order spinoffs have been doing it for decades. Bluff City Law appears to be following in that tradition. It isn't entirely factual, but that doesn't mean it's not accurate, either. It's a combination of the two. And that may allow the show to explore more possibilities than an entirely true story would.

On Bluff City Law, Elijah and Sydney are both high-powered attorneys, but it's been years since they've seen eye to eye. Their complicated relationship led to an estrangement, but when the show begins, Elijah is hoping to change that. He invites Sydney back to the family law firm, where they can work together on cases that might just change the world. Star McGee told Forbes that those cases were all civil law, not criminal.

"We need to know about the times where people do prevail against big business, where the little guy really wins," McGee said. "We don't always win the case. I wish we would, but we need to see that idealism, and have that kind of hope in our lives." Based on McGee's statement, it does sound like the show errs on the side of fiction, especially if it's looking to keep things optimistic in its ongoing courtroom battles.

Details of the cases are being kept quiet ahead of Bluff City Law's premiere, but executive producer Dean Georgaris told Forbes that he didn't really want to refer to them as "ripped from the headlines." Instead of borrowing real life stories from the papers, the show would explore timely issues like free speech and privacy. "We'll be taking on a wrongful imprisonment case, insurance companies, and the opioid criss," Georgaris said.

Though there are times where it may feel very real, Bluff City Law is ultimately a piece of fiction. It may shed a light on relevant topics that real people are dealing with today, but it's not a biopic or a documentary. And that might give the show a chance to get creative in its storytelling and be even more incisive than it could if it was just the facts.