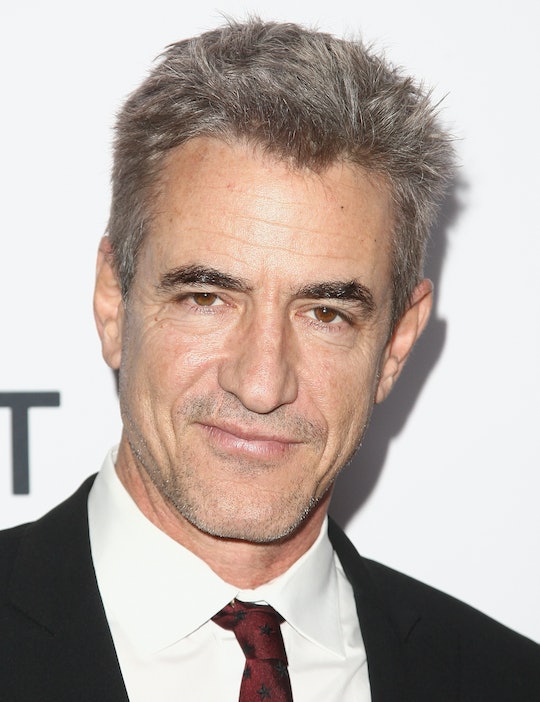 Dermot Mulroney Is An Unsavory News Anchor On 'AHS: Cult'

There are some characters in American Horror Story that were one-of-a-kind, like any one Jessica Lange played. Others were ripped from history, like Kathy Bates' terrifying Madame LaLaurie from AHS: Coven. In the case of AHS: Cult, just the premise alone was scary for some viewers: the aftermath of the 2016 election. With the subject matter that occurred less than a year ago, Ryan Murphy and producers may have taken inspiration from real people in creating their characters. So is Bob Thompson from AHS: Cult based on a real person? Dermot Mulroney plays a news anchor with a very scandalous backstory.

So far on American Horror Story, the only characters that are real people were in the first scene of the season: Donald Trump and Hillary Clinton. The premiere episode featured footage of the two on the campaign trail, culminating in meeting the fictional cast on election night. From Kai to Ally and Ivy, the characters all reacted to Trump's victory in different ways. Besides that instance, though, it seems that Murphy hasn't taken direct inspiration from any one person into his characters. Kai, for example, is not a real person but inspired by both internet trolls that contributed to the election and famous cult leaders like Charles Manson.

Last week's episode revealed that one of Kai's followers is news reporter Beverly Hope. She joined his cult after Kai, Harrison, and Meadow killed her nemesis, Serina Belinda (and her cameraman). Beverly hated Serina because she was promoted over her because of her relationship with anchor Bob Thompson. Serina got all the fluff pieces, like reporting on massage clinics, while Beverly needed to trek to landfills to report on decomposing bodies only to later get bumped for said fluff pieces. Prior to Serina's murder, viewers saw how she was trying to advance her career by canoodling with Bob.

Dermot Mulroney plays a pretty convincing anchor — and he's also incredibly sleazy. He invited Serina to his lake house for a weekend together to "discuss her career," and then told Beverly that the only reason he didn't fire her was that he was afraid she'd sue for discrimination. Is he based on a real person? It doesn't seem like it. Not only is there not an anchor named Bob Thompson out there in the real world, but there doesn't seem to be an anchor that is publicly known for having a dubious relationship with one of his reporters.

If anything, Murphy may have drawn from several political leaders whose scandals have overshadowed their careers. Women sleeping with bosses in order to get up the corporate ladder is also a trope viewers have seen time and time again in TV and film. Perhaps Murphy just used Bob as Serina's way of getting ahead of Beverly, which ignited her rage. Considering Serina's fate, it's uncertain if Bob will live much longer. I'm curious as to what the aftermath of her death will be, considering she's a public figure — and because Bob is so infatuated with her.

I wouldn't be surprised if the clown cult gets rid of Bob as well, but it may look too suspicious if Beverly is the last one standing. Another possibility is that Bob can move his advances over to Beverly... but considering how poorly he treated her, this doesn't seem likely. Thankfully, the sleazy character doesn't seem to be based in reality, but I'm interested to see where his character arc goes. Will Serina be replaced by another young reporter? Will Bob give Beverly more responsibilities? Will Bob run off, fearful that the clowns will get him, too? The audience will need to keep watching in order to know for sure.