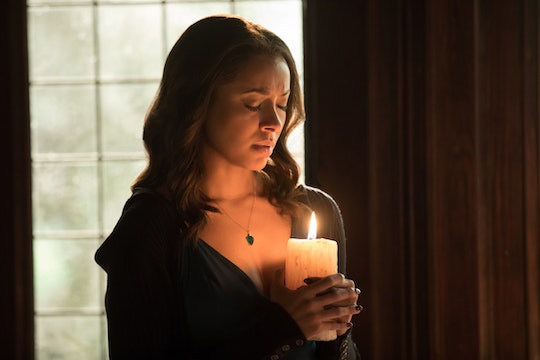 If I've asked this question once, I've asked it a thousand times. Is Bonnie dead on The Vampire Diaries? She's had a few close calls throughout the years, though, she's always managed to find her way back to the land of the living. So will this be another one of those instances or does the looming series finale of next week mean this one's for keeps? Honestly, at this point I'd say that pretty much anything is possible.

The fact of the matter is that it would make a lot of sense if she were to die, especially considering that her life is linked directly to Elena. As long as she lives, Elena will forever remain in a deep and peaceful sleep. And now that we know Nina Dobrev is returning to her iconic role in the series finale, then logically this means that Bonnie's death had to occur. I mean, after all, according to Kai there are no loopholes with this curse. So if Elena's awake, then doesn't Bonnie have to be dead?

As per usual, the series has left us with more questions than answers. Even the promo immediately following the episode doesn't indicate one way or another Bonnie's fate. I want to believe though that she wouldn't leave us so suddenly — not just when she seemed to gain a certain sense of closure over Enzo's death.

Enzo told her to live a great life and she promised that she would, so it'd be kinda weird to just have her killed off moments later. What was the point of that emotional interaction then? It just wouldn't make any sense. Call me an optimist (or just downright naive), but I think that she simply passed out due to all the magic she just used. Don't forget that the twins just drained her of all her magic that helped put the fire out. That has to leave you pretty tired and weak. Sure, her nose was bleeding which is never a good sign, but I think the writers just want us to worry and emotionally torture us one last time before this series comes to a close.

Then again, how else will Elena be able to return if Bonnie is still around? I can't pretend to have a complete grasp on how this is going to play out. But then again, that's part of what's always made this show so exciting. You never know what to expect. But I highly doubt that's the last we'll see of Bon-Bon. She'd deserve a better departure than that, so until I'm proven otherwise, I'm going to remain hopeful.