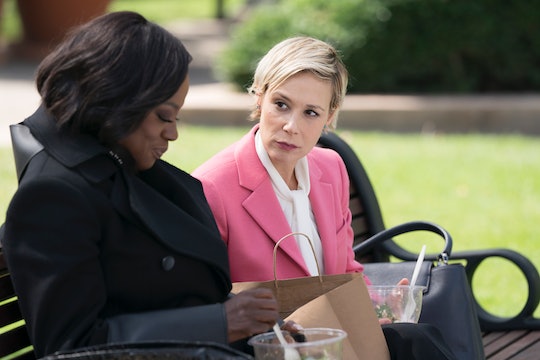 Here's What We Know About Bonnie's Son On 'HTGAWM'

Tragically killed babies are an unfortunate pattern on How To Get Away With Murder and Season 5 is no different. Last season, viewers learned that the District Attorney's office had a secret file on everyone associated with Annalise Keating, and in Bonnie's file was evidence suggesting that her son might still be alive. So is Bonnie's son really dead on HTGAWM? Let's just say there are some alternate theories out there.

Here's what the show has revealed so far. Bonnie and her older sister Julie were sexually abused all throughout their childhoods by their father Robert, and both of their parents conspired to essentially sex traffic their own daughters for money. At age 15, Bonnie got pregnant after one of her dad's friends raped her, but after she gave birth, Robert told her that the baby had died. Her file at the DA's office, however, said that the baby had actually survived and was kidnapped from the hospital. Nate Leahy did some digging and discovered that Julie had taken the baby from the hospital, but no one knew what happened to him after that — until she appeared on the show.

Frank tracked Julie down to determine what happened to Bonnie's son and, after a lot of false leads, she finally broke down and admitted that she kept her promise to protect the baby from their dad — by burying him in the woods.

Apparently, Robert had instructed Julie to kidnap the baby from the hospital by posing as Bonnie and telling nurses that she wanted to take the baby home. Robert had struck a deal to sell the baby to someone and used Julie to get his hands on him. Julie, having no idea who he'd sold the baby to, but knowing that a terrible fate was probably awaiting him based on the kinds of people her dad associated with, made a snap decision. While in the car with her dad and the baby driving away from the hospital, she opened the door at a stoplight and jumped out, running into the woods for cover. She told Bonnie that killing the baby was the only way she could think of to spare him from suffering the same kind of life the girls had growing up.

Needless to say, this whole enterprise took Bonnie on a long and emotional journey involving a lot of crying and a days-long depressive spell where she couldn't even get out of bed.

If you don't quite buy Julie's story about a teenage girl burying her newborn nephew in the woods, there is an alternate theory that has been brewing since the Season 4 finale: Gabriel Maddox is actually Bonnie's long lost son. Aside from the fact that these two reveals happened at the exact same time on the show, the timeline based on their ages actually does fit.

Regardless of the truth behind what happened to Bonnie's son, it doesn't look like things get any easier for her this season. She's heavily implicated in the apparent murder at Connor and Oliver's wedding, which has been revealed in bits and pieces via flashbacks all season long. The carnage is very much not over this season on HTGAWM.

More Like This
Take An Exclusive Sneak Peek At 'Bluey' Season 3 Before It Lands On Disney+
The White Lotus Is The Perfect Thrilling Treat For After The Kids Go To Bed
10 Cozy, Romantic, & Drama-Filled Shows To Watch If You Love 'Virgin River'
'Virgin River' Fans Can't Stop Cracking Jokes About How Charmaine Is *Still* Pregnant