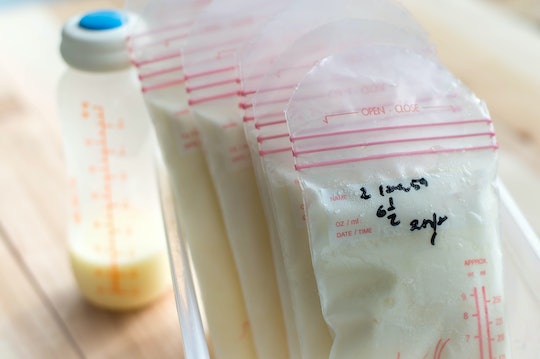 If you thought the benefits of breast milk were just for growing babies — think again. Major chemical companies seem to think it could be beneficial for adults, too. In fact, as Bloomberg recently reported, companies are investing in ingredients found in natural breast milk that can be used in adult supplements for "digestive and immune health." But with all that said, is breast milk actually good for adults? And if so, how can breast milk benefit them?

Rachael Buck — a researcher at Abbot Laboratories, the producer of Similac, which is a brand of infant formula — recently told Bloomberg that she believes the breast milk ingredient, human milk oligosaccharide (HMO), could have a positive effect on adult health later in life.

"This has the potential to help both brain development early in life and, later in life, brain decline," she told Bloomberg, adding that this ingredient in breast milk could facilitate treatment of irritable bowel syndrome, allergies, and even brain aging. “It’s just been a fascinating treasure trove of benefits that we’ve uncovered,’’ she told Bloomberg.

So what exactly is this magical component of breast milk? According to a 2016 study published by the Cambridge University Press in The British Journal of Nutrition, human milk oligosaccharide (HMO) is a sugar and the main ingredient in breast milk; it escapes digestion and settles in the colon, where it feeds beneficial bacteria. While the bacteria is known to build strong immune systems in babies, benefit brain development, and stimulate growth of good bacteria in the gut, according to the Cleveland Clinic, it could be beneficial for adults, as well, as Bloomberg reported.

The 2016 study published in The British Journal of Nutrition also suggests that HMO in an adult diet could provide health benefits including shaping the human gut microbiota and promoting the growth of beneficial bacterias. The health of the gut microbiota, which is improved by HMO, according to the study, can influence energy metabolism, hormonal balance, and immunity.

Researchers at UC San Diego Health Sciences are also working to isolate small amounts of HMOs to discover their health benefits for adults and think that it could potentially treat adult disorders such as Crohn's Disease, arthritis, and autism, according to NBC News affiliate WNDU.

"We’re making a lot of parallels from infant nutrition up to adulthood and trying to find what ways where we can use the compounds to treat adult disorder," Dr. Sara Moukarzel, a nutrition and education researcher at UC San Diego School of Medicine told WNDU.

Now, global chemical companies, such as DowDuPont Inc. and BASF SE, are reportedly investing millions to ramp up production of the beneficial ingredient, which is already synthetically produced for use in infant formulas, according to Bloomberg and the Philadelphia Business Journal. DowDupont is reportedly investing a whopping $40 million to expand production for use in adult supplements in hopes that it could result in a $1 billion market, according to the Philadelphia Business Journal.

This isn’t the first time there has been a craze surrounding breast milk outside of it being used for naturally feeding babies. In 2014, according to TODAY, some bodybuilders turned to human breast milk to bulk up or boost their health. There was even a category for “Men Buying Breast Milk” on OnlyTheBreast.com, that was created along with the site but gained traction during the hype.

However, according to CBS News, health experts eventually debunked the claim that drinking plain breast milk bought online is more beneficial for adults when compared to cows’ milk, and actually said there could be health risks in consuming breast milk bought online. As Dr. Sarah Steele of Queen Mary University of London wrote in a 2015 editorial for the Journal of the Royal Society of Medicine, "Prescription drugs, illicit drugs, alcohol and food make it into milk."

But it seems the craze may have not been entirely unfounded — it sounds like there could be some real benefits found in the ingredients of breast milk that could boost adult health if consumed properly, and it could be in the form of the next biggest health supplement.