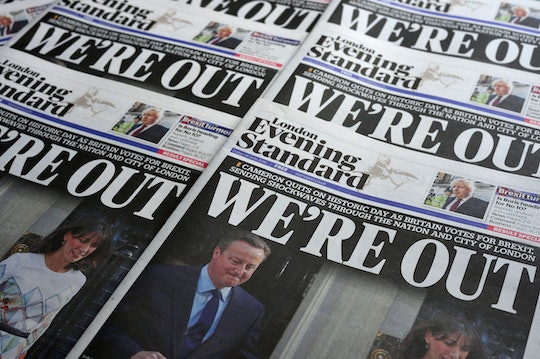 Is Brexit Supported By Liberals Or Conservatives? UKIP Led The Charge

Last night, the United Kingdom voted to leave the European Union, a body it's been a part of for the past 43 years. That decision has been dubbed the "Brexit." The decision is already having massive repercussions for the country and the global economy, so is Brexit supported by liberals or conservatives? The simple answer is that the Brexit vote was an initiative pushed by a faction within the Conservative Party, but it appealed to a wider base by rallying around three issues: national identity, immigration, and the economy.

From the beginning, the U.K. kept its EU relationship distant. When the EU launched the shared currency, the euro, the U.K. refused to adopt it — the first of many push-backs. According to the BBC, former Prime Minister David Cameron first entertained the idea of a Brexit vote in 2009, insisting that any change in the U.K.'s status be led by the people. As a harbinger of growing support for leaving the union, the anti-EU Independence Party (UKIP), won the second-most votes in the 2009 parliamentary elections.

Many of those who voted to leave were motivated by UKIP's assertions that the millions of dollars sent to the EU every week could instead go towards domestic improvements, like the National Health Service. However, according to Mother Jones, UKIP's Nigel Farage has already denied that pre-Brexit promise to improve the healthcare system (leaving many regretting their vote). Other pro-Brexit voters felt that the country had lost control of its own government because it had to comply with the EU's immigration and refugee policies. And, tangentially related to the refugee crisis, a tight job market has given rise to xenophobia and global skepticism throughout the U.K., according to Forbes. For those unhappy with the increasing globalization of the U.K. a vote for leaving the EU became a vote for returning the country to a more homogenous population (and potentially forcing refugees to leave).

On the other side of the argument, those who voted to remain in the EU felt that the organization symbolized a kind of solidarity and stability, both economically and culturally, according to Reuters. The fluidity of European borders has meant more diverse cities and towns, more cultural exchange, more information-sharing, and more far-flung work opportunities. Belonging to the EU has its advantages: combined coffers, an open marketplace, high educational standards, dependable allies, and ease of travel. Those who voted to remain in the union wanted to keep reaping those benefits.

Notably, the support for leaving the EU is not just divided along party lines, but also generational ones. Sixty percent of voters age 18-24 wanted to stay in the EU, while 60 percent of those 65 and older wanted out. British millennials have never known the U.K. except as a part of the EU. Many of those millennials post-vote are now mourning the loss of shared economic and educational opportunities, according to Quartz.

In 2013, Cameron took a gamble and again promised that there would be a Brexit referendum if the Conservative Party won the 2015 election, according to the BBC. He even gave it a deadline: by 2017. At the time, he said, “public disillusionment with the EU is at an all-time high.” They won the general election, and he was held to his word.

The risk, on his part, was that he was not in favor of leaving the European Union. He made that promise to assuage growing pressure and dissent from UKIP representatives and members of his own party. According to the BBC, Cameron said he never wanted to see the day the U.K. decided to "pull up the drawbridge and retreat from the world.”

According to the Telegraph, Cameron started a campaign to renegotiate the relationship between the U.K. and the EU in an attempt to stem support for an in-out referendum. He agreed that things needed to change, but maintained that the issues the country faced could be fixed within the existing framework of the EU. Ultimately, though, he made good on his promise. The BBC reported that he said, “It is time for the British people to have their say. It is time to settle this European question in British politics. I say to the British people: this will be your decision."

While Cameron himself called it a "very simple choice," opponents said leaving the EU would put the country through years of "uncertainty," reported the BBC. And though it's only been a few hours since the decision to leave the EU has passed, the future of the U.K. is indeed looking very uncertain. Cameron, before the votes were counted, said, "If we left the European Union, it would be a one-way ticket, not a return." He's since resigned as prime minister.