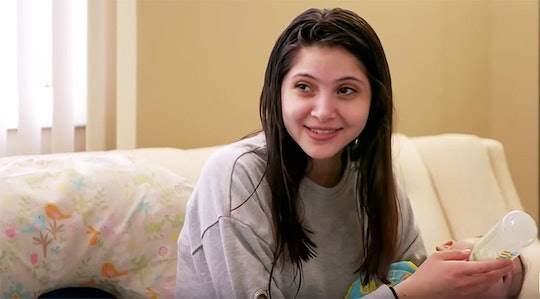 Teen Mom Young & Pregnant's Brianna Jaramillo recently put some distance between herself and her boyfriend, Robert Reams. Feeling independent and motivated after the quasi-split, Brianna considered going back to school. But did Brianna actually enroll in college? The mom-of-one is trying to figure out next steps.

Moving to a new place can refocus your priorities, a phenomenon Brianna experienced firsthand after she moved from Wisconsin to Oregon with her family and Robert. Feeling overwhelmed with all of the changes, Brianna decided to send Robert back home to Wisconsin.

“I think it’s taking a step back, looking at the relationship and seeing if we rushed it too much or if we just need some time apart,” Brianna explained to Robert, according to MTV. “I don’t see sending you home as ending the relationship. I think that being long distance will make us or break us.”

Robert wasn't so sure about the change, telling Brianna: “If this is the end, I need to know now. I don’t want a call. I don’t want to lose you guys at all... I hope this isn’t a goodbye.”

Spoiler alert: the two have since broken up. Robert touched on their split in a November 28 Instagram post, sharing that he hopes to see Brianna and her 1-year-old son, Braeson, again. He said: "Man I care soo much about her and Braeson & I was always with him😖 I miss Braeson soooooooo much its crazy 💔😭 i hope one day i can see her and braeson again!!!!!!"

Brianna doesn't seem as devastated about the split, as evidenced by her desire to start fresh at college. The only problem? It can be a struggle to balance motherhood with school.

“I really wanna do it. I just don’t know if I can work, be a mom and go to school all at the same time,” she explained about her dilemma, according to MTV.

Although a counselor brought up the smart idea of enrolling in one class at a time to make the process manageable, Brianna still isn't sure about hitting the books.

“Would I be stable financially?” she said. “I don’t really know what I’m going to do at this point.”

Brianna's Instagram account doesn't reveal whether or not she's currently in college. But many fans are hopeful she'll make it work.

"Education is very important especially when u have a little one, that’s the best thing you can do for your child.....," one fan tweeted about Brianna's schooling. "I don’t regret my babies but I do regret not finishing before I had them."

"Yes go to school and work both! Take care of that sweet lil baby boy," someone else said.

Another commenter chimed in: "She absolutely SHOULD enroll in college! & her MOTHER should do everything in her power 2 not only encourage it, but 2 MAKE IT HAPPEN 4 her daughter."

Hopefully, Brianna will eventually figure out her college plans. The good news is you can go back to college at any time (older students rock, btw), and the mom has plenty of opportunities at her disposal.