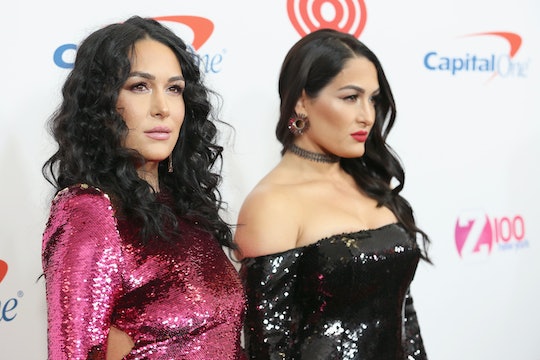 Brie Bella Is Trying For A Second Child On 'Total Bellas'

In addition to being a WWE star in her own right, Brie Bella stars on E!'s Total Bellas alongside her twin sister (and fellow wrestler) Nikki. It follows their lives outside the ring, including Brie's relationship with wrestler Daniel Bryan. They've been married since 2014 and have a young daughter together named Birdie Joe Danielson. But is Brie Bella pregnant again?

It doesn't seem like Brie is pregnant currently; if she is, then she hasn't announced it to the general public. However, she and Daniel have been open about wanting to have more children. In the promo for Season 4 of Total Bellas, which airs on E! on Jan. 13, Brie informs her husband that she and her sister have been invited back (presumably by the WWE) for a storyline. In response, he wants to know whether or not she's told them that she and Daniel are trying for a baby. Not sure how that could be a problem for Brie in the ring because she's not actually pregnant yet, but perhaps the full episode will delve more into the situation.

While Brie isn't pregnant at the moment, it looks like she and Daniel are actively trying to have baby. So there's a chance that they could be welcoming another child in the future.

Shortly after Birdie's first birthday, Brie spoke to Access about her plans for her family. She revealed that her husband was eager to have a second kid, but she wasn't quite ready as of May 2018. She explained that there were still a lot of things that she wanted to do before she got pregnant again; she didn't elaborate on what those things were, but it's possible she was referring to career opportunities, going by the Season 4 trailer.

However, in the same interview, she stated that 2019 was the year that she and Daniel were going to begin trying again. But they may have begun earlier than that. The show films weeks ahead of airing and it seems they were already in the process at that point. Brie concluded that she would "probably be pregnant sooner rather than later."

Brie reiterated that just a few months later while speaking with E! News on the red carpet for the E! People's Choice Awards. "I might be doing a little baby making for number two," she said. "Birdie's 18-months, I'm gonna be 35 next week...I think it's time!" She went on to say that Daniel had his fingers crossed for a son because he wanted to carry on his family name; she said it was important to him to keep the name going because he was "the last Danielson." (Girls can do that too, FYI!) But Brie was hoping for another girl because she wanted Birdie to have a sister, just like she herself did.

Everything Brie has said gives the indication that she's still in the middle of trying for her next child, though she's not there yet. Season 4 of Total Bellas might deal with Brie's fertility journey more in depth, especially as she continues to balance her family and her job.