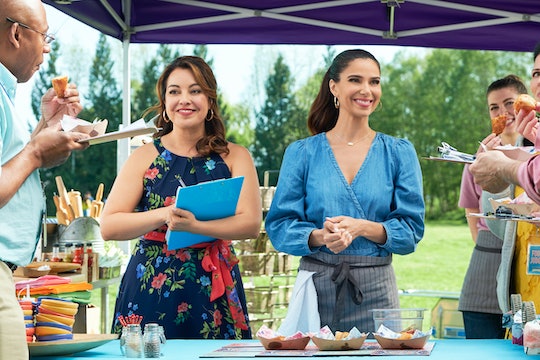 One of the most relaxing things you can do on a quiet, hot summer night, is sit back and unwind with a sweet Hallmark movie. The channel’s latest offering, A Taste of Summer, combines the allure of food and love, and is set in a picturesque town you’d love to spend your summers in. After seeing the magical ambiance of A Taste of Summer, you might be wondering if Bright Shore, Massachusetts is a real place.

Unfortunately, the town is completely fictional. A Taste of Summer was filmed in Vancouver, British Columbia, which doesn’t come as much of a surprise, considering how many Hallmark movies are shot there. In fact, plenty of American productions houses — including Hallmark, Warner Bros. and Fox — film projects in Canada because of the tax incentives they get according to the Hollywood Reporter. So, while Bright Shore may not be real romantic haven you were hoping for, you can visit Vancouver to see the landscapes and backgrounds the film has to offer.

The film stars real-life married couple Eric Winters and Roselyn Sanchez, who play two restaurateurs, Caleb and Gabby, who fall in love as they compete in a local food festival. Gabby, who left her job as sous-chef in New York, moved to Bright Shore to open her own restaurant. There, she meets and competes with Caleb, a single father who runs his own restaurant and coaches the girls’ softball team. They enter their restaurants into Bright Shore’s Taste of Summer Food Festival competition, and over the course of the summer, they find a connection and passion for their work and each other.

In an interview with Parade, Winters talked about how thrilled he was to be able to work alongside his wife and have his whole family by his side in Canada. “We had a lot of fun working together, he said. “We actually have different styles where I’m joking around a lot and goofy on set and I like to get people laughing and she’s more focused and serious at times, which we would tease each other about. But we obviously got along well and it was never difficult. It was just great being able to work together and having the family all together in Vancouver.”

In a separate interview with Parade, Sanchez noted that A Taste of Summer is not only her first Hallmark movie, it’s also the first film she stars in with her husband. “It was interesting to me because I like the fact that Hallmark movies are very positive, the messages are very clean,” she explained. “The movies are for the entire family, and it was the first time that we were going to be able to do a movie together. It was the first time we actually worked together in front of the camera. We are happy that we are going to be able to sit down with our daughter and show her a movie that we did together. It’s just beautiful.”

The chemistry between Sanchez and Winters is apparent in A Taste of Summer, and it makes the film all the more sweet. The town of Bright Shore may be fictional, but there’s no doubt that the love between the two lead stars is very real.

A Taste of Summer premieres Saturday, Aug. 10 at 9 p.m. ET on the Hallmark Channel.