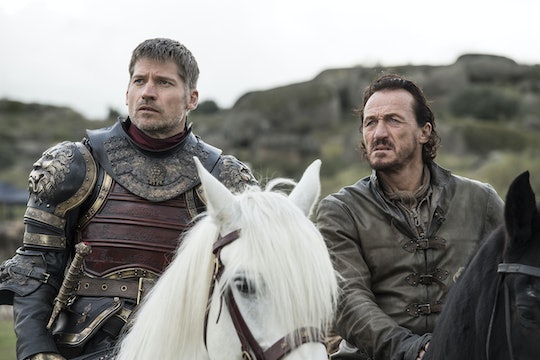 Is Bronn Dead On 'Game Of Thrones'? Daenerys & Her Dragon Attacked

When Daenerys unexpectedly attacked the Lannister forces on Game of Thrones in "The Spoils of War," chaos immediately ensued. With all the soldiers riding around and a dragon breathing fire, it was difficult to tell at first who died and who made it out alive. Bronn looked like he was standing directly in the blaze for a minute there, but is Bronn dead on Game of Thrones?

At the moment, it's a little difficult to say. Bronn made it out of the fray by the skin of his teeth at first, narrowly avoiding death more than once during the battle. But in the final moments of the episode, someone saved Jaime from being roasted by dragon fire by tackling him into a handy nearby lake. It was difficult to tell who it was at first (it might have been Dickon Tarly, who was also lingering in the area ready to help), but a closer look revealed that Bronn was indeed Jaime's savior. It was a heroic move, but it could have cost him his life. The episode came to a close before it could reveal what happened to Jaime or Bronn, leaving both of their fates up in the air.

The odds looked good for Bronn, however, considering just how many times he was able to avoid death in Episode 4.

When Daenerys and Drogon first toasted the Lannister army, Bronn and Jaime were luckily out of the line of fire. However, mere moments later Bronn was forced to endure a battlefield obstacle course that could've ended his life at any turn. First a Dothraki soldier sliced a leg off Bronn's horse (you'd think the Dothraki would be a little less inclined to hurt a horse, considering...) and left him to flee on foot.

Bronn managed to get away by ducking into a carriage that — surprise, surprise — held the gigantic crossbow that Qyburn came up with to take out Dany's dragons. The Dothraki soldier unintentionally became the guinea pig on which Bronn tested its effectiveness, spearing him at the end of one giant arrow. Then Bronn turned the crossbow skyward, managing to wound Drogon enough to ground both him and Dany.

If Bronn had stayed where he was, he might have survived the battle with nary a scratch. Instead he chose to go rescue Jaime, potentially leading to his own death by drowning in the process. It's not clear whether he made it out or not, but if Episode 4 proved anything, it was that Bronn must have nine lives. Chances are he'll be just fine.