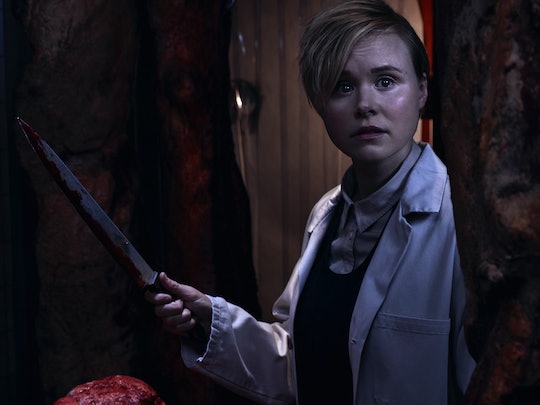 What makes horror shows like American Horror Story scary to me — besides killer clowns — is realism. When “based on a true story” is tacked on a poster for a scary movie, rest assured I will not be lining up for a ticket. AHS is no stranger to plucking storylines from real-life horrors: Delphine LaLaurie, a sadistic slave owner played by Kathy Bates, was a crucial character in Coven; and The Cecil Hotel in Los Angeles served as inspiration for Hotel — just to name two examples. So are there real-life places this season as well? Is Butchery on Main in AHS: Cult a real place? The restaurant serves as a key setting this season.

Butchery on Main is owned by couple Ally and Ivy. Ivy, played by Alison Pill, has taken the reins in restaurant operations as of late. Ally, portrayed by Sarah Paulson, is suffering PTSD from the 2016 election and copes with several phobias. It seems that Ivy is (or wants to be, anyway) more focused on the food and kitchen, while Ally handles the operations. On last week’s episode, there was a confrontation with two Butchery employees: head chef Roger and Pedro, who’s of Hispanic descent. Roger told Ally that he wants Pedro to be fired; a few scenes later, Roger was found murdered in the restaurant’s meat locker.

Locations on American Horror Story are always important, and this season proves no different. Seeing as it's our protagonists’ place of work, and that a murder has taken place there so soon, I have a feeling Butchery will continue to be a spot where plots unfold. Previous locations are based in reality. The Cecil Hotel is one, as is the New Orleans home where Delphine LaLaurie committed her gruesome crimes. Beyond that, several characters and terrible fates were inspired by true life. Many of the main characters of Freak Show were based on real sideshow performers in the early twentieth century, and the actual lost colony of Roanoke served as the base for AHS: Roanoke.

So far, it seems that the real-life plot points in AHS: Cult are events that many viewers don’t want to revisit: the 2016 election. The season began on election night, with some characters (Kai) happy that Trump won and others, like Ally, who was devastated. Despite the premiere and the show’s theme song, which features Trump and Clinton masks, creator Ryan Murphy stated that Cult is not about the election. “We're trying to understand how someone who is very charismatic in the culture can rise up and become a leader,” he told The Hollywood Reporter. "What did Trump tap into? We're interested in his rise and how that happened.”

So seeing as so many elements to American Horror Story has been plucked from real life throughout the years, is Butchery on Main an actual restaurant? As it turns out, no. Prior to the show airing (even before the theme was revealed) sleuths on Reddit found photos of the restaurant’s exterior on set. It was clearly not a functioning restaurant nor an already-existing place. At the time, Redditors still did not know what the show would focus on this season, and guessed titles such as AHS: Butchery. And while that ended up not being the case, it indicates that Butchery is not a real location, but rather the creation of the show’s writers.

Furthermore, while this season takes place in Michigan, writer and producer John Gray shared a photo of filming in Los Angeles. So, unfortunately, fans cannot go visiting Butchery as they can visit The Cecil or LaLaurie’s home (I honestly don’t know why anyone would want to, but that’s just me) — but that doesn't mean it'll be any less scary to viewers.