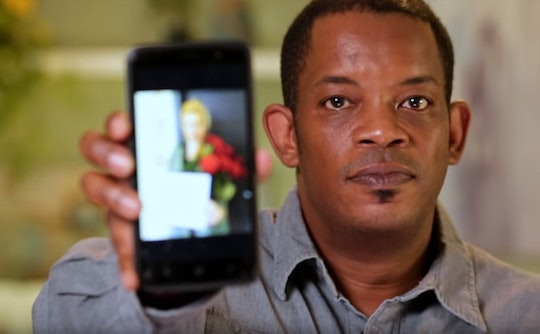 One of the most fascinating stories on this season of 90 Day Fiancé: Before the 90 Days is that of Caesar and his tele-girlfriend Maria. After meeting her through Ukrainian dating site, Caesar didn’t just give Maria his heart, he gave her most of his savings as well. Maria is avoiding him at every turn, so viewers can’t help but wonder: Is Caesar being catfished on 90 Day Fiancé?

For now, it’s hard to say for certain, so fans will have to watch through to the end of the season to find out. But Maria's dodgy presence on the show sure makes it seem like Caesar is being duped. To start, Caesar revealed that he spent over $40,000 dollars on her, and she still hasn't made an effort to see him in person.

In the first episode of the season, Caesar — a 47-year-old nail technician from Jacksonville, Florida — said that he met Maria on a website called AnastasiaDate. “It’s a very special website that brings Americans and Ukrainian women to meet each other for a small price,” he says. “AnastasiaDate has a unique system. You can buy flowers, candy. Then it’s up to the girl whether she wants to respond.” Caesar then reveals a picture on his phone that shows Maria holding the flowers and card he sent her with his email and phone number on it. “This cost me $450 dollars,” he adds.

After doing a little sleuthing into AnastasiaDate through the Better Business Bureau’s website, I found dozens of consumer complaints about the site. Some claimed the relationships they developed on the site were scams, and others complained about the company’s questionable billing practices. Of course, these are just customer grievances about AnastasiaDate, so they don’t prove anything, but I think it’s still interesting to see what people other than Caesar had to say about the site.

On the show, Caesar says that after talking to Maria via email, they hit it off and fell in love. He reveals text messages and videos she sent him, in which she lovingly calls him “my husband” and “big daddy.” When a producer asks him if it’s possible Maria could be sending those videos to other people as well, Caesar says he “hopes” she’s not.

After talking to Maria for five years, Caesar plans a trip to Mexico so the two can finally meet in person. But, as the trip date nears, Maria continuously gives him the runaround. He sends her money for a ticket which goes unaccounted for, and then he buys her a ticket to Mexico to ensure she comes. But before and after his arrival to Cancun, Maria completely ghosts him. She stops answering his calls and texts, and Caesar has no idea why. To top it all off, he loses his luggage, in which he prepared the ultimate romance kit — an engagement ring and chocolate panties.

Later, after Caesar finds his luggage and candied panties, he tries to contact Maria again with no success. When he goes down to the pool and shows pictures of Maria to a few fellow vacationers, one swimmer asks him if he's being catfished.

"I was shocked when the guy at the end said Maria was a catfish,” Caesar says in a confessional. “They thought that was pretty funny. I think they were just amazed at how beautiful Maria is. That's the love of my life and I know she's not a catfish at all.”

After all the questionable circumstances Maria put Caesar through — like draining his finances to the point where he lives on instant ramen — it sure feels like she’s scamming him. However, Caesar continues to hold on to hope that their love is real, and fans will just have to wait and watch through the season to see if she ever materializes.