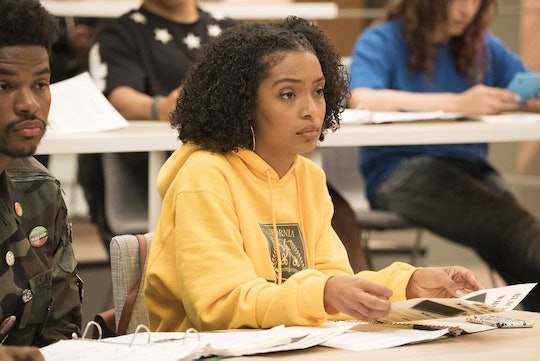 Zoey Is Taking College By Storm In 'grown-ish'

Zoey Johnson (Yara Shahidi) is off to college in the black-ish spin-off, grown-ish. After much deliberation during the last season of black-ish, Zoe Zoe decided to attend the California University of Liberal Arts, also known as Cal U for short. Just from the glimpse viewers got of the school in the backdoor pilot, Cal U definitely looks like a great place to attend. But is Cal U from grown-ish a real school?

Although the name sounds legit, Cal U is actually totally fictional. However, it wouldn't be surprising if it was based on any number of California state schools like UCLA, UC Berkley, or UC Davis, just to name a few. Like many other shows, it's just much more convenient for grown-ish to use a fictional university rather than attempt to work in the confines of a real one. By creating Cal U, the writers have the opportunity to form the school to be however they want it to be. For example, Charlie, Dre's former co-worker, is somehow able to get a job there as a professor, even though anyone that knows Charlie knows he probably shouldn't be working in higher education.

Additionally, having Zoey go to school in California also makes it much easier for the show to do crossovers with black-ish, since they're taking place in close vicinity to each other. In the trailer, it already looks like Zoey's mom, Rainbow, will be making a surprise visit, much to Zoey's chagrin. Could Zoey already be getting into trouble at school? We'll have to wait and see.

Random parental pop-ins aside, this show is really all about Zoey and her new adventures as a college freshman. As she'll quickly learn, living on her own will have its perks, but it'll certainly be a learning experience. From figuring out the dating scene, having a roommate, going to parties, and drinking, there will be a lot thrown at Zoey in this first season. Thankfully, she'll have a group of friends to help her manage it all.

Living with Zoey is her roommate Ana (Francia Raisa), a Cuban Republican. Zoey will also come face to face with pill-dealing Vivek (Jordan Buhat), free-spirited Nomi (Emily Arlook), twins Jazlyn and Skyler (Chloe x Halle), and her crush Aaron (Trevor Jackson), along with a few others. While Zoey will build friendships, it won't always be easy, especially when her friends have different point of views and opinions than her.

Similar to black-ish, grown-ish won't shy away from the tough issues, and will deal with topics like safe spaces, drug abuse, peer pressure, and many other things all centered around living on a college campus. Of course, the show will still have that same level of comedy fans can expect from black-ish and grown-ish creator Kenya Barris, but it will dig into some deeper issues as well.

That being said, the show, at its heart, is still a comedy. This Wednesday, Jan. 3, the two part series premiere will air on Freeform beginning at 8 p.m. EST. In the first episode, Zoey will struggle with the knowledge that she won't automatically become the hot shot on campus that she was in high school and back at home. Fitting in with this new environment will take a bit of getting used to for Zoey, but knowing her she'll definitely be able to figure out... eventually.

However, in the second episode Zoey will still be struggling as she gets her first sense of FOMO, or fear of missing out. Just like many college student, Zoey will have to learn how to juggle her student life and her social life, in order to make sure she can still party and graduate.

You can see what's all in store for Zoey by tuning in to grown-ish tonight!