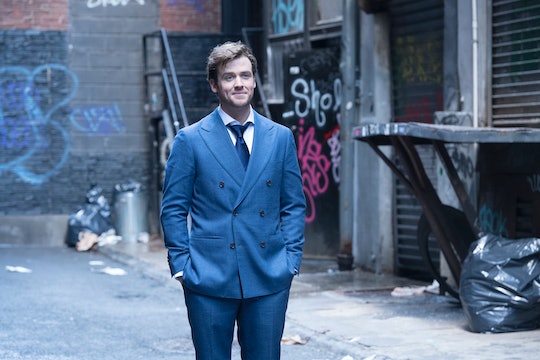 It's 2018, so if you're going to make a crime procedural, it better be good, because there are already so many of them out there. Whether it's a show about cops with a heart of gold, detectives who can predict the future, or detectives who have troubled pasts but great interrogation skills — really, we've seen it all. Which is why I had to wonder if Cameron Black from Deception is a real person or not, because the premise of ABC's new detective show is so original. So is he?

Black, played by Jack Cutmore-Scott, is a superstar magician whose career is "ruined by scandal," according to the official ABC description. So he turns to the FBI, the one place that will let him use his "art of deception, influence, and illusion" to catch some of the hardest criminals to track down. Meanwhile, he has a brother that he's trying to get out of prison, so there's an ulterior motive and some more drama there as well. But is he based on a real magician or not?

It's hard to imagine the FBI hiring a magician to help them out. Of all things, it really doesn't instill a lot of faith in the system, which is why after digging through all the evidence, it appears as thought Black is a work of pure fiction. But that doesn't mean Cutmore-Scott didn't have a lot of real life magicians to base his illusions and character on.

Cutmore-Scott told Entertainment Weekly that he's a fun character to tap into, fictional though he is. He said in an interview about the show:

I think the most interesting thing about Cameron is that he’s been on stage his entire life, so that has defined who he is. He’s been performing, he’s been in the public eye under the very controlling hand of his performer father as well, so he’s literally grown up in show business and I think that has, to a great extent, shaped who he is.

Cutmore-Scott added, "He’s very comfortable in the public eye, he’s very comfortable on stage, but he’s got a bit of What to do? figuring out who he is off stage and what his life is without magic, which is where we find him essentially at the beginning of the show."

In real life, Cutmore-Scott had a lot of magic to learn. He told Entertainment Tonight that David Kwong, a producer on the show and actual magician, worked with him to get him "to where I knew how to hold a deck of cards properly, which is actually a lot more work than it seems. Cutmore-Scott added:

Once we finished that, they put me in a magic boot camp, where I was starting out from scratch and practicing anything and everything they would throw at me. [By] the time we got the scripts in, I would start to know ahead of time the tricks I should be focusing my energy on, with a couple of weeks lead time so that by the fourth or fifth take, people would believe it's something Cameron Black would do.

Cutmore-Scott continued by saying that his character's swagger and confidence is entirely fictional and really "far removed" from who he is in real life. He told ET, "Equally, an important thing about Cameron is that he's riddled with insecurities. He's got all kinds of issues. He's just really good at covering them up."

So although Cameron Black isn't a real magician and as far as we know, the federal government doesn't have an illusionist on their team, he's still a complex and relatable character. Consider me intrigued!