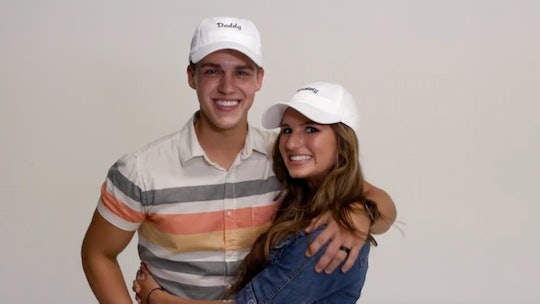 Is Carlin Bates Having A Boy Or A Girl? Her Sex Reveal Was Messy Fun

If you're a fan of the Duggar family and their friends, the Bates family, then your'e probably well aware of the baby boom that seems to be hitting both families. (Which isn't too surprising, considering Jim Bob and Michelle, and Gil and Kelly Jo have 19 children apiece.) Plenty of people who follow the Bates have probably wondered: Is Carlin Bates having a boy or a girl?

As a refresher, Carlin, 21, is is the ninth child of Gil and Kelly Jo. She married Evan Stewart in May, according to Cheat Sheet. Just a few months later — in September — the newlyweds announced they're expecting their first child, Us Weekly reported.

“We are beyond thrilled to be expecting our first child. Spending every day with your best friend and building a life together has already exceeded our happiest dreams,” Carlin exclusively told Romper at the time. “We are so happy at the thought of parenting together. … Three at the table sounds perfect! God is so good.”

On Friday, Oct. 4, Carlin took to Instagram to share the sex of her baby. And from the looks of it, it was a pretty messy endeavor. "Layla Rae Stewart, we can’t wait to meet you!" the mom-to-be captioned a photo of herself and Evan covered in pink paint while holding a "Baby girl" balloon." Meanwhile, dad-to-be wrote on his Instagram, "Daddy’s little girl... coming February 2020." Yep — yet another baby girl will be joining the Bates family, in addition to Whitney Bates' and Erin Paine's daughters on the way. And if you ask me, the name Layla is simply precious.

Carlin's friends and family were over the moon for her and Evan. Whitney Bates — who is also expecting a baby girl — wrote, "SO EXCITED!!!!! Cannot wait to meet sweet Layla!! And these pics..... perfection!! She is already so loved!!" (Carlin's sister Erin Payne is also pregnant with a daughter.)

Her parents seem pretty excited about another granddaughter, too. "Wahoo!!!!! Counting down to hold little Layla!" Gil and Kelly Jo wrote alongside heart-eyed emojis.

At the same time the Stewarts made their pregnancy announcement, Carlin shared they had received some scary news during her first prenatal appointment. Apparently, she has the same two clotting disorders her sister, Erin, has had during her pregnancies. “Evan had to learn to give me two shots daily,” Carlin told People. “We have had a lot of opportunity to pray and to try to trust God, as we have researched the different side effects and concerns. So although it has been a learning experience, we know we have an even bigger reason to be thankful that the baby is doing well.”

Since revealing her baby news at the beginning of September, Carlin has offered a number of light-hearted pregnancy updates with her Instagram followers. On Sept. 14, the expecting mama let fans know she's in the thick of "morning sickness." Alongside a photo of herself and Evan standing outside of a restaurant, Carling wrote, "Dinner was delicious ...until I got home. Thank you @evanpstewart16 for taking such good care of me xoxo #pregnantlife." She even added in a green, sick-face emoji in case you didn't catch her drift.

On Sept. 21, she shared, "My new favorite exercise is a cross between a lunge and a crunch...I call it LUNCH. I blame it on the baby. hehe."

Clearly, Carlin and Evan Stewart are excited about becoming parents. And despite the challenges they've already faced, they've managed to stay positive. I have no doubts that they're going to rock this whole parenting business when baby Layla arrives in February. Congrats, again, guys!