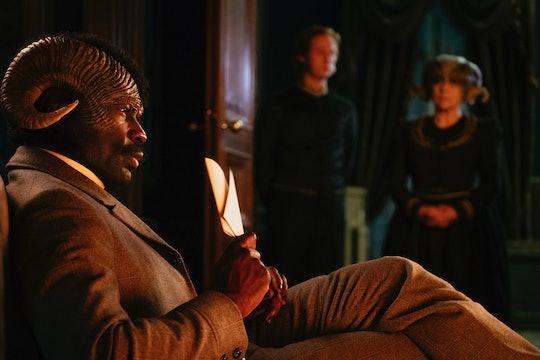 Amazon Prime's highly anticipated (and high-budget) new fantasy epic Carnival Row dropped Labor Day Weekend, and given the richly crafted world in which it takes place, viewers tuning into the show may be wondering whether Carnival Row is based on a book. The series did have a circuitous route to TV, but it's actually an original work.

Carnival Row is based on a feature film script by Travis Beacham titled A Killing on Carnival Row. Beacham also wrote films like Clash of the Titans and Pacific Rim, the latter of which Guillermo del Toro directed. When Amazon first ordered three scripts for a Carnival Row series in 2015, it was with the assumption that del Toro would come on to cowrite, executive produce, and direct, according to Deadline. In 2016, after those scripts were turned in, Amazon gave the series a pilot order. But in May 2017, Deadline reported that, due to his busy film schedule, del Toro was forced to pull out of the project. Jon Amiel, who'd previously directed on Netflix's Seven Seconds and Showtime's The Borgias, came on to direct all eight episodes of Carnival Row's first season instead. The series was cowritten by Emmy Award-nominated Rene Echeverria (Teen Wolf, Medium, Dark Angel), who also stepped in as showrunner.

Carnival Row follows the tense political conflict in a fantasy realm called The Burgue, a steampunk Victorian metropolis where humans and magical creatures coexist side by side. Unsurprisingly, humans are the aristocratic, imperialist villains in the series, while magical creatures are forced to survive as refugees in The Burgue's red light district AKA Carnival Row.

At the heart of the story is Vignette "Vinny" Stonemoss (Cara Delevingne), a fairy from the island of Fae. When human soldiers occupy her ancestral homeland, she's forced to escape to The Burgue and work in service to the ruling class of humans. Amidst the occupation effort, she fell in love with a soldier named Rycroft "Philo" Philostrate (Orlando Bloom), but she seems quite surprised to discover he's still alive when she arrives in The Burgue. She's also extremely upset with him for destroying her home and essentially forcing her magical species into indentured servitude.

Other magical creatures also live in The Burgue, including centaurs, brutes, and pucks, and they're all considered to be a subclass to humans. They even get their own degrading slur: "critches."

But the political turmoil and class warfare plaguing The Burgue is actually the backdrop of the story. In the foreground is a string of unsolved murders, apparently perpetrated by some unknown, evil magical entity. Philo, now a police detective, is the officer assigned to the case, which forces him to navigate The Burgue's complicated strata in order to solve it. Plus, there's still Vinny, bent on revenge, but magnetically drawn to her ex-lover/oppressor. Amazon Prime announced Carnival Row had been greenlit for a second season in July, according to Variety, well before the first season had even premiered, signaling that the streaming platform has high hopes for the series.