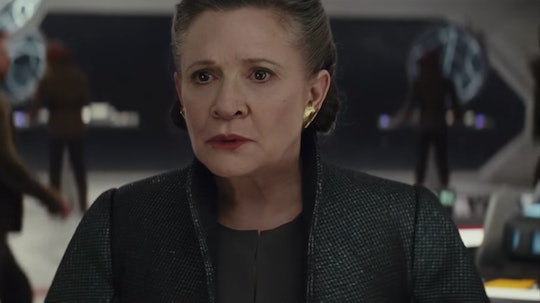 When Carrie Fisher passed away in December of last year, fans of the actress and author were devastated. She had been such an important part of so many people's lives through her professional work, and her sudden death was an incredible shock. She had also been in the middle of filming the newest trilogy of Star Wars films, in which she reprised her role as Leia Organa. Leia is integral to the world of the films, leaving many wondering if Carrie Fisher is in The Last Jedi, the most recently released Star Wars movie.

Fisher is present throughout The Last Jedi because she had completed the shooting of her scenes before her death. However, it will be the last Star Wars movie that Fisher does appear in; the upcoming, untitled Episode IX is being rewritten now. While her unexpected passing will result in changes to the planned storylines in the next film, writer-director Rian Johnson still believed that fans would be satisfied with how Fisher's final performance as Leia played out in The Last Jedi, even though her character arc was cut off in the middle.

"There's no way that we could've known this would've been the last Star Wars movie she would be in, so it's not like we made the film thinking that we were bringing closure to the character," Johnson told Entertainment Weekly. "But watching the film, there's going to be a very emotional reaction to what she does in this movie."

Johnson also explained that Leia's character had, in many ways, been defined by loss, starting with the destruction of her planet in the original films. She continued to deal with conflict in The Last Jedi, specifically related to the arrival of a new commanding leader of the Resistance named Vice Admiral Holdo, who was played by Laura Dern. Leia might not get the intentional farewell that many might have liked to see, but at least she got a full story in her final film.

Leia's relationship with surrogate son Poe Dameron, played by Oscar Isaac, also continued to develop. Isaac told Entertainment Weekly that Leia saw potential in Poe and did her best to cultivate it in The Last Jedi. "Poe's arc is one of evolving from a heroic soldier to a seasoned leader, to see beyond the single-mindedness of winning the battle to the larger picture of the future of the galaxy," Isaac said. "I think Leia knows she won't be around forever and she, with tough love, wants to push Pie to be more than the badass pilot, to temper his heroic impulses with wisdom and clarity."

The Last Jedi was dedicated to Fisher in more ways than one, too. The film ended with a title card proclaiming, "In loving memory of our princess, Carrie Fisher," but Johnson also honored her during the premiere screening in Los Angeles in a way Fisher would surely appreciate. Vanity Fair reported Johnson saying before the film began, "I want to dedicate tonight to Carrie. I know she's up there right now flipping me the bird, saying, 'Damn it, Rian, how dare you bring the mood down and make this night a solemn tribute.' So let's all have a blast together for Carrie."

The Last Jedi may be the last chance fans have to see Fisher play Leia, but from the sounds of it, her time in the movie won't squandered. Johnson's comments make it seem like Leia will have a complete and emotional arc that gives fans a lot to enjoy when the film opens on December 15. And there could be a positive way to look at the abrupt goodbye: as long as Leia's story never officially ends, she'll always live on in some corner of the universe.