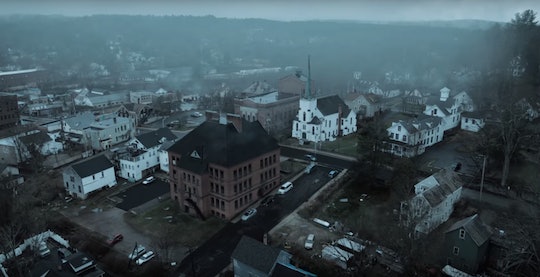 'Castle Rock' Is One Creepy Town

Castle Rock is the setting for several of writer Stephen King's most famous mysteries, as well as the new series debuting on Hulu inspired by King's work. The town is described as a creepy little hamlet in Maine, but is Castle Rock a real place? The short answer is no. It’s actually one of the three fictional Maine towns that King has used throughout a number of his novels and short stories.

The name of the fictional town, Castle Rock, was actually inspired by the name of the island fort from one of King’s favorite novels —Lord of the Flies. The author, who grew up and still lives in Maine, has created a trinity of fictional Maine towns, including Derry, Jerusalem’s Lot, and Castle Rock. On his website, you can find a map of King’s version of Maine, pinpointing exactly where the fictional hamlets would be. Castle Rock looks like it's situated near Oxford County; Jerusalem’s Lot is further north; and Derry is found near King's hometown of Bangor, which served as its inspiration. It is important to note that there is a real town called Castle Rock in Colorado, but it has no connection to the author's work.

The town of Castle Rock first made its debut in King’s 1979 novel The Dead Zone, and then served as the setting for his later works, including Cujo, The Dark Half, The Body, and Needful Things. It was also mentioned in a few of his other novels, like IT and Pet Semetary, and in "Rita Hayworth and the Shawshank Redemption."

At a recent ATX Television Festival Panel for the series, the show’s writers and co-creators, Sam Shaw and Dusty Thomason, talked about why they chose Castle Rock as the setting for the series and how they were intrigued by the idea of coming back to a town with such a ghoulish history. “[We] loved the idea that Stephen King returns to the scene of the crime and has visited decades and centuries of nightmares on the same however many acres of land in Maine,” said Shaw, “and you wonder, who stays in a town after the second serial killer, the demonic truck, and the rabid dog?”

In an interview for With An Accent at 2018 San Diego Comic Con, the duo also revealed their vision of what Castle Rock would look like in the modern day. “Part of what we were always intent on doing from the beginning was not telling a white picket fence, old school [story] where you find Derry or Castle Rock at the beginning of the novels, but sort of what does a town like that look like now?” Thomason told the outlet. “A town that had basically been thinned out in its population, to closed down storefronts, mills — now basically the main business of the town is incarceration.”

While the town is set in Maine, most of the series was shot in nearby Massachusetts, which has a similar ambience to the state. The town of Orange, Massachusetts was cast as Castle Rock, and was refitted with all kinds of props and signs for filming. In my mind sleepy, quiet towns make a great setting for horror stories because they allow the terror to be the loudest part of the experience. I’m excited to see what chills Castle Rock has to offer, and as a fan of King myself, I can’t wait to see what elements of his work the writers use in the series.