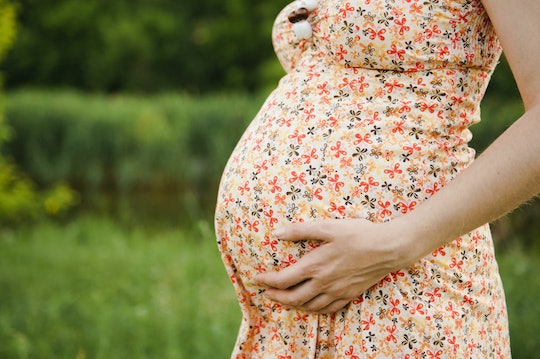 Can You Use CBD Oil While Pregnant? It's Not Like It's Weed...

It's safe to say that marijuana has never been more mainstream, with more and more states legalizing pot for medical reasons (and some states giving it the thumbs-up for recreational use, too). It's not just plain old weed that's blowing up, either — related products like CBD oil are super popular, too. CBD is a cannabinoid that doesn't get you high, like THC, but still theoretically offers same therapeutic benefits. People everywhere are vaping it, swallowing capsules and even adding it to smoothies, but is CBD oil safe to use when you're pregnant?

At first glance, CBD oil — sales of which are skyrocketing — seems like a dream tonic for pregnant women. Taken as a supplement or used topically, it's believed to reduce stress and relieve pain without some of the same dangerous side effects as traditional pharmaceuticals — and not just anecdotally, either. One study published in the Journal of Psychopharmacology actually found that "CBD was associated with significantly decreased subjective anxiety" (relative to placebo); another study published in the European Journal of Pain found that topical CBD application had "therapeutic potential" for pain and inflammation without any evident side effects. And that's not to mention the countless tales of people's lives that were reportedly completely changed for the better thanks to CBD, including kids with seizure disorders and other difficult-to-treat ailments. Oh, and unlike marijuana, CBD oil is legal in the majority of states (43 at the time of this writing, according to Bon Appetit).

Of course, just because something is safe for adults (or even kids) doesn't mean it's safe for a developing fetus. And, as you might imagine, there are varying schools of thought on whether the benefits of CBD oil outweigh any potential risks (even if those risks haven't been proven). Ultimately, as is often the case with pregnant women and medications of many kinds, a lack of research exists on pregnant women and marijuana, let alone CBD oil — which leads medical professionals on the more conservative side of the fence to go the "better safe than sorry" route.

"We know cannabidiol works on the same class of receptors as THC, but in different ways," Dr. James Lozada, Obstetric Anesthesiologist with Northwestern University Feinberg School of Medicine tells Romper.

"These receptors help our brains develop normally. Otherwise, we don't have a lot of information about the effects CBD has on pregnant women and their babies. Because of the uncertainty, I recommend not using these products during pregnancy — because we just don't have enough information to say whether it could harm your growing baby."

Additionally, he notes, "marijuana alone has not been shown to increase the chance of birth defects, stillbirth or preterm birth."

While some fear that CBD might have the potential to disrupt fetal brain development, proponents believe the opposite.

"Research has shown that CBD is a molecule that helps with neurogenesis, the development of healthy brain cells," Dr. Stuart Titus, Ph.D. tells Romper.

A leading researcher in the field and the president of Medical Marijuana, Inc., Dr. Titus explains that the science behind CBD's benefits has to do with the body's endogenous cannabinoid system, a complex network of endocannabinoids and their receptors found virtually everywhere: in the brain, organs, connective tissues, glands, and immune cells. Interestingly, Dr. Titus notes, the endogenous cannabinoid system was only discovered fairly recently in medical history (in the '80s), though there is a fair amount of research on how it functions, including a prominent study by Dr. Ethan Russo on cannabis-based medicinal extracts and the treatment of pain, inflammation, depression, anxiety, addiction, epilepsy, cancer, fungal and bacterial infections.

"Many of us are cannabinoid deficient," Dr. Titus says, a syndrome which has been linked with everything from chronic fatigue to fibromyalgia to early onset dementia.

Following that logic, a cannabinoid-rich diet would benefit both a pregnant mother and her baby.

"The more cannabinoids a mom has, the better off her kids are," says Dr. Titus.

Anecdotally, he adds, he's observed many pregnant women who used CBD oil to no ill effect (in fact, he says, their babies thrived).

All of this conflicting information leaves curious moms-to-be in a difficult position, to be sure. While the most sound advice is always to run any idea by your OB, you might find yourself immediately shut down depending on your doctor's personal opinion (and depending on your state's marijuana laws, you might even be nervous about bringing it up). Whatever you decide, do your research: Read the studies that exist, talk to other moms if possible, and make sure that you go with a reputable company if you do decide to try it.

More Like This
Everything You Need To Know About Missionary Sex During Pregnancy
Can You Have Sex With Placenta Previa? Experts Explain
100 Pregnancy Milestone Instagram Captions For Every Memorable Moment
Here's Why You Should Avoid Oral Sex If You Have Placenta Previa