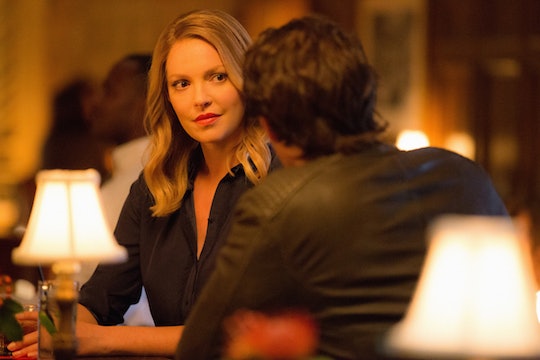 'Doubt' The Show Vs. The Movie

CBS' new drama, Doubt, premieres on Wednesday, Feb. 15 and includes a stellar cast that already has people talking. Starring Katherine Heigl (Grey's Anatomy), Laverne Cox (Orange Is the New Black), and Dulé Hill (Psych, The West Wing) this new show is sure to be a hit. However, some viewers can't help but wonder if CBS' Doubt is based on the movie of the same name. The show is actually totally different from the 2008 film.

Based on a play, Doubt, the movie, starred Meryl Streep, Viola Davis, Philip Seymour Hoffman, and Amy Adams, and told the story of a Catholic school principal who questioned a priest's ambiguous relationship with a troubled young student. During a time when the Catholic church was coming under fire for a multitude of molestation cases, the movie saw a lot of success and snagged five Oscar and Golden Globe nominations. But as great as the film was, the show is nothing like it.

The TV series is centered around a law firm and follows Sadie Ellis (Heigl) who is defending Billy Brennan (Steven Pasquale), a man who's accused of murdering his girlfriend 24 years ago. However, the show is, of course, more complicated than that. Though he's her client, Sadie is falling in love with Billy, which is totally unprofessional, but who doesn't love a forbidden romance? Besides Sadie and her romantic woes, the show also follows the other lawyers at the firm who have their own set of issues to deal with.

Helping Sadie with the case is her close friend Albert Cobb (Hill), who Sadie has to try and keep her feelings for Billy from. Also aiding Sadie is Cameron Wirth (Cox), a transgender Ivy League graduate who has experienced her own set of injustice, which makes her fight hard for her clients.

Working under Cameron is second-year associate Tiffany Simon (played by Dreama Walker) who comes from a small town in Iowa and is still learning the ropes. There's also Nick (played by Kobi Libii), a former felon who got his degree while in jail. All the lawyers are striving to please their boss Isaiah Roth (played by Elliott Gould aka Jack Geller from Friends), who's a legal legend.

The show is sure to be filled with drama and twists, and even if you're disappointed it has nothing to do with the film, you should still give it a watch. Doubt premieres on Wednesday, Feb. 15 at 10 p.m. ET on CBS.