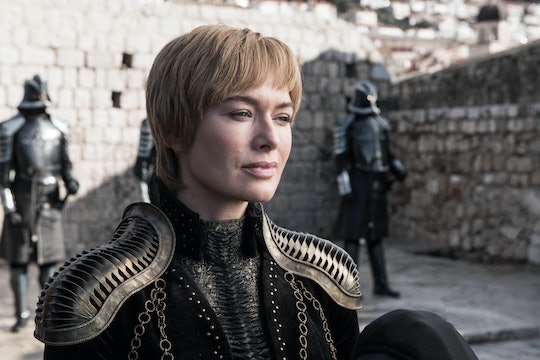 Season 7 opened with the freshly ascended Queen Cersei of House Lannister finally sitting atop the Iron Throne, but hated by virtually all. That includes her twin brother and lover Jaime, who finds himself increasingly disturbed by her ruthless actions. Early on in the season, she tells him they're going to have another baby — but is Cersei really pregnant on Game of Thrones? Most fans understandably assumed she's faking it.

After all, Jaime was obviously growing distant and starting to put together that Cersei was exhibiting a concerning number of the Mad King Aerys' behaviors. Plus, her obsession with defeating Daenerys Targaryen and Jon Snow when there are literal ice zombies very much on the way didn't exactly track as logical behavior. It would make sense for Jaime to feel more and more disgusted by the person he loves most in the world, especially now that their three children are dead for reasons that are mostly her fault, TBH!

Cersei is a mistress of manipulation and it would make perfect sense for her to fake a pregnancy in order to draw Jaime closer. The Season 8 trailer also features a glimpse of her crying into a wine goblet, which some have interpreted to mean a faked pregnancy, while others think it could point to a miscarriage.

On the other hand, there's some pretty strong evidence supporting a Cersei pregnancy, too. The timing is technically right — she and Jaime had sex right before he trotted off to Highgarden to kill Olenna Tyrell for her. She's also been toying with Euron Greyjoy in exchange for access to his formidable naval fleet, and he very clearly wants to be her king. It's possible Cersei and Euron conceived and she's passing it off as Jaime's baby, knowingly or unknowingly.

Cosmopolitan has a glimpse of the scripts from the episodes where Cersei discloses she's pregnant, and the show notes seem to imply that Cersei is being deeply sincere. One direction reads, "She nods, it’s true...Her happiness is contagious. They get another chance at family. This time with no one standing in their way."

And in the scene where Cersei refuses Tyrion's wine pour — a virtually unheard of move for Westeros' wine-mom-in-chief — he also has an inkling that something's up. His direction reads, "Tyrion sees what he sees and knows what it means. He can hardly believe it, but knows it to be true. She stays silent for too long, long enough to tell him that he’s right."

Of course, these could just be ways for the writers to encourage the actors to really sell the storyline, but it's clear that they wanted Cersei's pregnancy to come off as very real. Another major element at play here is that there are only six episodes left in the whole series and the White Walkers have already breached The Wall. Even if Cersei is pregnant, we'd probably never see her baby on screen. It's hard to imagine the show would leave a loose thread hanging like that — that is, if anyone survives at all.