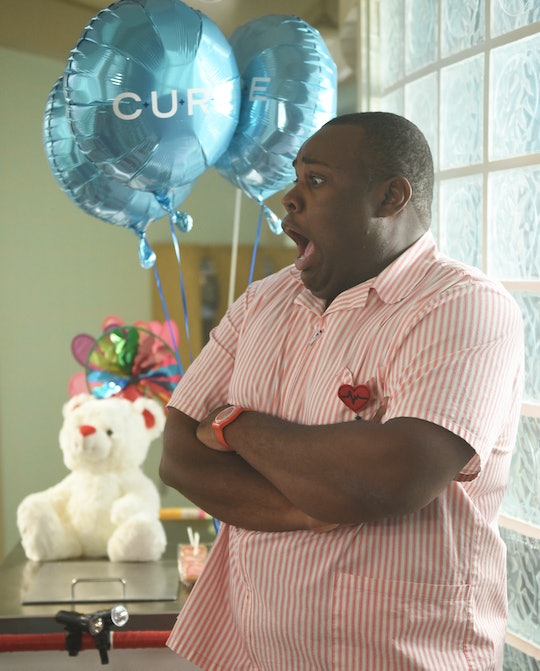 Is Chamberlain Really Dead On 'Scream Queens'? The Green Meanie Took Him Out

It looks as though Scream Queens doesn't want its fans to have even a little bit of happiness because they just killed off one of the show's most sweetest characters yet. I'm referring, of course, to Chamberlain, who was stabbed by the third killer, Wes, during the final few moments of Tuesday's episode. But is Chamberlain really dead on Scream Queens? As it stands right now, the prospects of his survival don't look that great. However, this is Scream Queens that we're talking about, so I wouldn't rule anything out completely.

That being said, though, Wes did seem to cut him pretty deeply and since Zayday herself is trapped in a pretty terrible situation by another Green Meanie helper, it's not as if he's going to get any help anytime soon. So even if he isn't already dead, he will be by the time anyone knows to look for him. It's a shame, really, considering how genuinely nice and helpful he seemed to be — a real rarity on this show. But I suppose that's what made him such an easy target for Wes. And the fact that he confronted Wes directly and completely alone about the strange contents he found inside that disgusting hairball, probably wasn't the smartest move ever. In fact, it left Wes with only one option: killing him.

Season 2 has certainly proven that it isn't afraid to take out beloved characters on any given week. First there was Chad Radwell, who did not have nearly enough screen time before his demise. And, of course, there's Denise Hemphill, who I suppose isn't technically gone for good since she's basically been put on ice until they can bring her back. But still, any week without her Quantico stories is a week wasted in my opinion. So I should've suspected that the lovable Chamberlain wasn't long for this world. But that still didn't make seeing his departure any less heartbreaking.

So now that we know that Chamberlain is (probably) dead, our main focus should now be on Zayday, who could very well end up sharing that exact same fate. She too confronted suspects alone and unarmed. She even accepted a beverage from them, which was definitely not the best idea ever. But one has to wonder why she hasn't been killed already. Was Jane merely waiting for her son to come back and do the dirty work for her or is Zayday going to serve a bigger purpose for them in the future? I suppose only time will tell, but in the meantime, let's all pray for Zayday's safe escape.