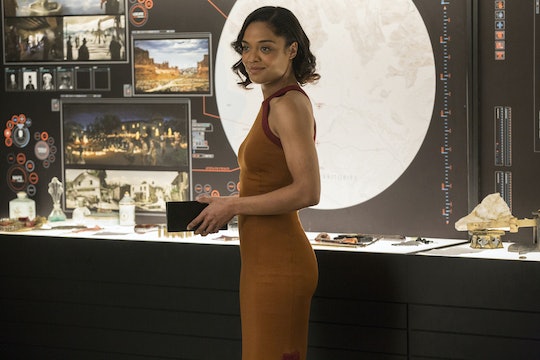 Is Charlotte Arnold's Daughter On 'Westworld'? This Theory Definitely Has Merit

Actor Tessa Thompson joined the cast of Westworld months after the rest of the core cast had already gotten their roles. She plays Charlotte, the young, beautiful, and more than a little intimidating executive director of Delos Destinations, who we know very little about. So is Charlotte Arnold's daughter on Westworld? There are a few things that suggest that this theory might not add up, but more than a few things that also suggest that it shouldn't completely be ruled out.

Here is what we do know. The cornerstone of Bernard's backstory is the death of his young son named Charlie. This is our first clue, as VanityFair.com points out, since Charlie is often a nickname for girls named Charlotte. This backstory is meant to mimic the tragedy of the real Arnold's own life. He does say to Dolores at one point that he used to read Alice in Wonderland to his son, without specifically naming him. As he specifically mentioned a "son" and not the more gender neutral "child" or "kid," it would seem to suggest that this theory is more or less debunked, as Charlotte is demonstrably female. Charlotte and Bernard have also had further interactions in which Charlotte actually fires Bernard. This is slightly odd if she is his daughter, as wouldn't she have recognized him?

Here is where we get a little bit more into speculation. First of all, Charlotte definitely looks like she could be the child of Gina Torres (who plays Arnold's wife) and Jeffrey Wright. She is also 33 years old, approximately the same age as the park. And speaking of which, isn't 33 a bit young to have such a prestigious position at the company? Could she have gotten her position from her important father, the founder of the park? (Then again, maybe she's just that amazing.)

There's nothing that makes better television than a good secret child (except in Gilmore Girls, of course). Perhaps part of Arnold's tragedy was that his wife had a daughter he never met. Maybe he died when she was just a baby and he was still far away in wherever the Delos Complex is. It's possible that Charlotte and Arnold were always estranged, and Ford wove her existence into Bernard's backstory in some way. Sure, it's a stretch, but so is creating a robot version of your dead former partner and best friend.

Until we know the truth, it looks like Charlotte will remain one of Westworld's biggest remaining mysteries.