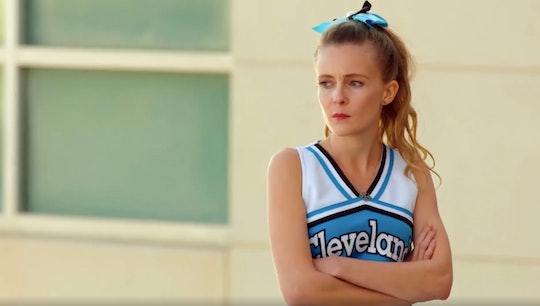 Lifetime's 'Cheerleader Nightmare' Is Full Of Melodramatic Twists And Turns

Lifetime is known for dramatizing scandalous and horrifying real life events, churning out movie after movie inspired by things that have actually happened. But sometimes they throw realism out the window in order to offer the kind of soapy melodrama that you're tuning into Lifetime for in the first place. For example, Cheerleader Nightmare isn't based on a true story, but that's just how it should be.

One look at Lifetime's blurb for the original movie proves it's not quite tethered to the idea of authenticity. It follows a teenager named Sophie who is innocently flying a drone with her AV club when she spots her boyfriend making out with the head cheerleader of their high school. As though that wasn't already bad enough, Sophie and her boyfriend are handed another helping of bad luck.

The cheerleader is found dead and Sophie's boyfriend is the main suspect. He insists upon his innocence and, though he lied to her once already, Sophie believes him. She's of the opinion that someone is framing him for the murder, which becomes clear as soon as another person is killed. Sophie has to play Nancy Drew to get to the bottom of things before she meets a grisly end herself. Perhaps she could use her drone to snoop around and find the culprit?

Cheerleader Nightmare premieres on Lifetime on Sunday, July 29. Strangely, the first preview for the movie gives no glimpse of cheating or drones; instead it paints a picture of cheerleader in-fighting leading to violence. It seems at least one girl on the team is searching for a new head cheerleader because the current one is a "snitch." After the murder, someone new ascends to lead the team while Sophie does her best to bring to light exactly what's going on. And she has her work cut out for her, because there is seeming no end to the secrets and plots in her high school.

As outlandish as the film may seem, there are threads of truth in a lot of its twists. In 2016, Complex reported that a man used a drone to catch his wife cheating, so it has occurred at least once in the real world. And there are instances of high school cheerleaders being murdered or attempted murder resulting from cheerleader-related tension. However, the circumstances don't quite line up with what happens in Cheerleader Nightmare.

In May of this year, the New York Post reported that high school student and cheerleader Emma Walker was killed by her boyfriend. In 1991, the mother of a Texas cheerleader plotted the murder of another cheerleader's mother, according to People. No one connected with the Lifetime movie has cited either situation as an influence, but there does seem to be some real life precedent. Lifetime has also been down this well before: 1994's Death of a Cheerleader starred Tori Spelling as a cheerleader who was stabbed to death by another girl at school. It was based on the 1984 murder of Kirsten Costas. The Cheerleader Murders is another entry in this very specific genre, but there's no evidence that it was inspired by anything that really happened.

Despite Lifetime's penchant for utilizing true stories, Cheerleader Nightmare is a wholly original film. That may give it room to invent more than it would be able to otherwise, and also allows it to embrace the inherent campiness you would expect from a movie with its title and subject. But even though there are many aspects about it that seem kind of out there, there are also quite a few real world examples that prove equally bizarre things can actually happen.