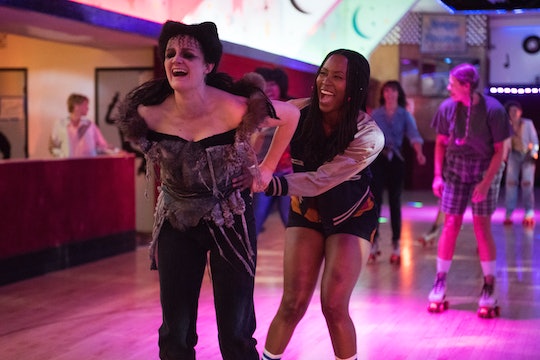 It's time to take a trip back in time. Netflix's newest series, GLOW, will take audiences back to the '80s with a group of diverse women trying their hand at wrestling. The new series is inspired by the real GLOW: Gorgeous Ladies of Wrestling television show that aired from 1986-1989, so it's no surprise that some fans are wondering if the characters on the new series are based on real people. For instance, is Cherry Bang from GLOW based on a real person?

On the new series, Cherry is a professional stunt woman whose career peaked during the Blaxploitation era. She looks to GLOW as a way to do more than just double for someone else — she wants to be the star. So far there's been no word about Cherry's character being based on anyone specifically, but her character was probably inspired by the women in the original GLOW, even if it wasn't pegged to someone specific. The new cast is just as diverse as the original show, if not more so, and that's certainly intentional.

Though the original series was also funny at times, it was mainly about empowering women. As Deadline puts it, the show was made as an answer to the male dominated World Wrestling Federation, and gave women their own place to shine in the arena. Many of the women who starred in the original show gained fame and notoriety over the course of the series' four seasons, making names for themselves — something many of the characters in the new series hope to achieve.

For Cherry, being on GLOW means getting to be in the spotlight as herself, rather than pretending to be someone else. For protagonist Ruth, played by Alison Brie, she's a down on her luck actress who's hoping for a role that's more than just playing a man's secretary. "I'm interested in real parts," Ruth stated in the trailer.

And that's pretty much the case for everyone that ends up joining her for the GLOW auditions. There's a print model, a Hollywood party girl, and so many others looking to change their lives through GLOW. Each of these women have their own reasons for joining and it'll be fun to learn their backstories throughout the season.

The show, which is produced by Orange Is the New Black creator Jenji Kohan, is clearly looking to focus on strong and complex female characters — and if it's anything like OITNB, it'll be a hit.