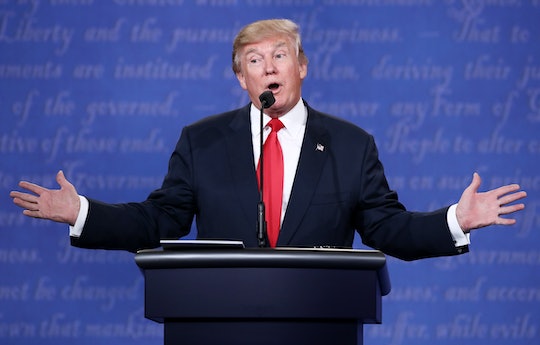 Is Childcare Tax Deductible In Every State? Trump's Plan May Not Help All Families

At first glance, President-elect Donald Trump's vision for improving child care aid in offsetting the costs for families may be the one good thing to come from his upcoming presidency. Yet while Trump's proposals to reform child care tax credits may be an improvement at the federal level, many states are lagging behind in helping parents. For those curious about current child care tax laws and Trump's proposed changes, you may be wondering if child care tax is deductible in every state.

More Like This
Vaccinated People Can Ditch Masks. Where Does That Leave Kids?
Kick Off Summer With These Classic & New Family-Friendly Movies
Wait, Did The Government Actually Do Something For Parents?
Bindi Irwin Has Been Sharing The Cutest Photos Of Her Daughter

“I think this is an issue worth exploring in New Jersey. There are two barriers: one is the will to do and two is the money,” Cecilia Zalkind, executive director of Advocates for Children of New Jersey, told NJ 101.5.

Zalkind said that such tax credits are important to both middle- and lower- income families.

Further proof of that is Trump's proposed rebate. Parents can claim up to $6,000 for two or more children under current federal law, according to the IRS. Up to four children can be included under Trump's tax credit, and the maximum deduction will match the average cost of childcare in whatever state you're filing in. For example, in New York City, the average weekly cost of raising a 3-5 year old is $242, which amounts to $12,584 a year. But don't expect to get that much, especially if you're poor.

The Tax Policy Center argues that many families' taxes will increase because Trump plans to repeal Head of Household status and personal exemptions, and child care savings won't offset this.

Trump wants to create a rebate for poor families, who don't earn enough to pay income taxes and thus don't benefit from deductions. The rebate will be $1,200, but as The Washington Post pointed out, the existing Child and Dependent Care Tax Credit offers a maximum of $1,050 for one child, and the credits can't be combined.

So that means low-income parents will only see $150 more than they normally would. Oh look, all of your financial problems just went away.