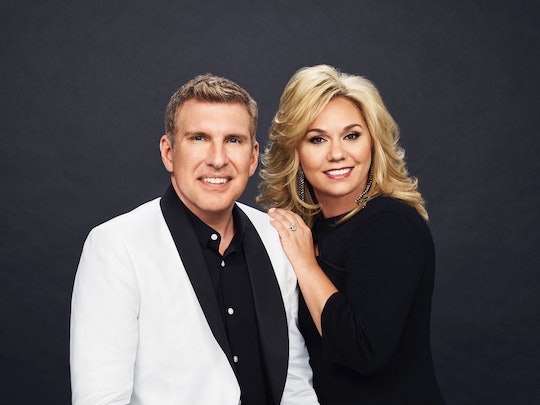 Todd & Julie Chrisley's Reality TV Career May Be Over

Since the premiere of Chrisley Knows Best in 2014, fans have been following Todd and Julie Chrisley through all kinds of personal drama. But after being in the limelight for years, the reality stars are now making headlines for something far more serious than the show. Todd and Julie are facing major legal troubles, and many fans are wondering if this will impact the future of the series. So, is Chrisley Knows Best canceled?

As of now, USA Network hasn't canceled the show, but it may make a decision in the next few months. Todd and Julie’s situation could be serious, and depending on what happens, it could potentially impact their ability to do the show. On Aug. 13, the couple and their former certified public accountant were indicted by a federal grand jury for "various financial crimes," reported E! News, and they are now facing several charges, including tax evasion, aiding the filing of false tax returns, wire fraud conspiracy, and conspiracy to commit bank fraud. Todd’s attorneys, Stephen Friedberg and Bruce H. Morris, say the allegations in the indictment “are based on complete falsehoods” and “the Chrisleys are innocent of all charges,” according to Fox News.

Neither USA Network nor representatives for the Chrisleys immediately returned Romper's request for comment.

The news doesn’t come as much of a surprise, because Todd warned fans this indictment was coming just days before it happened. In an Instagram post, he detailed the circumstances leading up to the indictment, and alleged he was framed by a disgruntled former employee. “It all started back in 2012, when we discovered that a trusted employee of ours had been stealing from us big time,” he wrote in the post. “I won’t go into details, but it involved all kinds of really bad stuff like creating phony documents forging our signatures, and threatening other employees with violence if they said anything. We even discovered that he illegally bugged our home.”

Todd claimed that he fired this employee and took him to court, and that’s when the “real trouble” started. “To get revenge, he took a bunch of his phony documents to the U.S. Attorney’s office and told them we had committed all kinds of financial crimes, like tax evasion and bank fraud,” Todd wrote. “That got their attention all right, but once we had a chance to explain who he was and what he’d done to us, they realized it was all a bunch of nonsense and they sent him on his way.”

Todd said that at that point, he believed the case was over, but he now thinks the former employee “persuaded” different government investigators to reopen the case. “So far so good — except that our former employee didn’t give up,” Todd alleged in the post. “Somehow, he persuaded a different set of investigators at the U.S. Attorney’s office not only to reopen the case but also to grant him immunity from prosecution for his own crimes and bring charges against us.”

Todd concluded the lengthy Instagram post with news of the pending indictment and an adamant denial of any wrongdoing. “As a result, it looks like later this week Julie and I are going to be named in a federal indictment charging us with tax evasion and probably a bunch of other financial crimes as well,” he wrote. “I’m telling you all this now because we have nothing to hide and have done nothing to be ashamed of. Not only do we know we’ve done nothing wrong, but we’ve got a ton of hard evidence and a bunch of corroborating witnesses that proves it.”

Regardless of Todd’s claims, the Chrisleys still have serious legal battles to face. The fate of Chrisley Knows Best remains unclear for now, but fans may hear renewal or cancellation news soon.