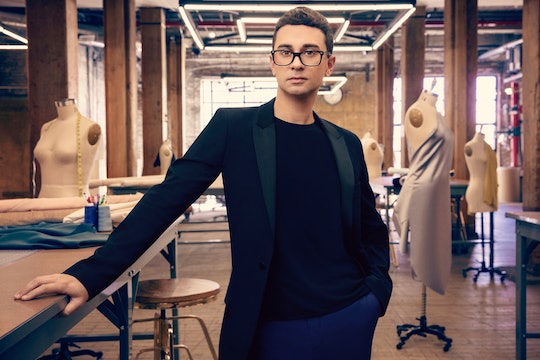 Surprisingly, Siriano isn't a judge. He's taking over the mentorship role from Tim Gunn, which means he'll be the one in the workroom talking the designers through their strategies and encouraging them to make it work. And he's not the only new addition to the show: Karlie Kloss replaces Heidi Klum as the host and two new people are joining Project Runway veteran Nina Garcia on the judging panel. Stylist turned designer Brandon Maxwell will be a judge, as will former Teen Vogue editor in chief Elaine Welteroth. Guest judges will come and go on a weekly basis as usual.

That means Siriano's expertise won't be limited to an end-of-episode analysis. He'll be there almost the whole time to give designers tips and help them realize their vision — as well as offering critiques when they need it. And it seems like he's up to the challenge.

While talking to Variety, Siriano expressed excitement about being the show's new mentor. "Project Runway has offered such wonderful opportunities for so many and I'm excited to take on this role as a mentor," he said. "I hope to guide and inspire the new talent on the rise."

While Gunn left behind big shoes to fill, Siriano could bring an interesting new dimension to his position on the show. Gunn was an effective teacher who knew how to deliver criticism and praise, but Siriano can provide designers with the inside scoop. He's been exactly where they are; he's had to create couture on a time crunch and whip up stunning creations out of unexpected materials. He also went on to have a very successful career as a designer, which is the real goal in the end. His advice suits the situation to a T.

During a joint interview with Kloss for People, Siriano admitted that some things about the process caught him by surprise. While the show was filming, he simply did his job, but it was later on that he realized how much weight his words truly carried. There's no need to fear his mentorship style, however, because Kloss chimed in to say that he was "such a good teacher." She noted that he was great at offering constructive criticism that came from a good place.

It goes without saying that Siriano will be a different kind of mentor. He and Gunn are two very different people, and it's natural for their workroom style to reflect that. But it certainly seems like Siriano knows what he's talking about. He'll be a fresh new voice in a revamped version of Project Runway.