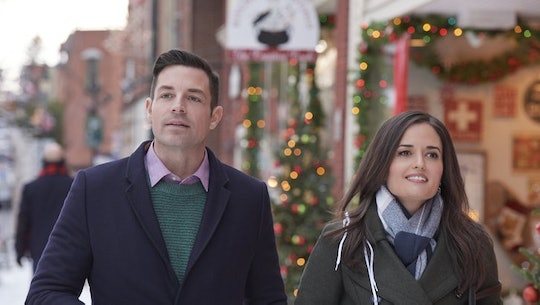 The holidays are ripe with made-for-TV movies and the Hallmark Channel is among those holding the top Christmas movie spots. Some of their original films are based on true stories while others follow a well-written fictional plot. With Countdown to Christmas nearly coming to an end — because the big day is soon, friends — there's still a few days to catch their remaining flicks like Christmas at Grand Valley, starring Danica McKellar. With all that said, is Christmas at Grand Valley based on a true story?

From the sound of it, Christmas at Grand Valley isn't based on a true story but don't let that deter you from tuning in. It doesn't mean some of the themes, plot, or characters aren't inspired by real life people or events. Besides that, this one has an even bigger reason you should watch — two Wonder Years stars reunite to work together on set for the first time in 25 years. The first is (you guessed it), McKellar, who played Winnie Cooper on the hit show that aired '88 to '93. The second is Dan Lauria who's best known for his role as Jack Arnold — a rough on the outside, soft on the inside type of dad to Karen, Kevin and Wayne Arnold on the show.

Just because Christmas at Grand Valley isn't based on a true story doesn't mean you won't experience the same roller coaster ride of emotions. You might even find yourself so invested, it'll feel like a story ripped from the "Lifestyle" section of the Sunday paper. Christmas at Grand Valley follows a burned out Chicagoan gallery artist, Kelly (McKellar) who's all but given up on the art scene. Sounds like it's time for a break. Kelly returns to her scenic hometown, Grand Valley, just before the holidays. Enter Leo (Brennan Elliott). He's the pinnacle of the "do-it-all" modern man — successful in business and an amazing father trying to find balance in it all. Is there even such a thing?

It's not long before Leo's next assignment lands him in Grand Valley where he's to review a hotel to determine its value. Naturally, as a loving dad, Leo combines business with pleasure and takes his kids along to make it an official Christmas vacation. At some point, Kelly and Leo meet (and it may have something to do with Kelly finding her love of art again), with Kelly re-living all her favorite Grand Valley memories and traditions with Leo and his kids. There has to be some kind of magic in the air. I mean, it is Christmas, people.

If you're wondering where the Wonder Years reunion comes into play, Lauria plays Kelly's dad, Frank, who runs the town's beloved diner and loves Christmas to an almost unhealthy degree (even claiming the title "Mayor of Christmas"). He and Kelly are extremely close so he may or may not have anything to do with inspiring Kelly to listen to her heart to reclaim her passion for art again, as well as find love. Sounds pretty adorable if you ask me.

Movies based on true stories aren't necessarily the best movies. Christmas at Grand Valley has all the right ingredients for a feel-good holiday film despite of the fictional premise. So, gather your favorite blanket and cozy up on the sofa for this Wonder Years reunion and ultimate Christmas-night-in flick.