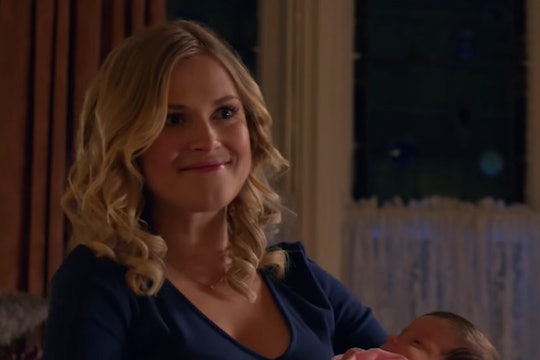 Netflix is giving us another Christmas movie, and based on the trailer, it looks like it'll be another hit for the streaming site. The film follows socialite Ellen Langford (The 100's Eliza Taylor), who's attempting to get her father to trust her enough to be CEO of his gifting company. In order to do so, he sends her on a mission that takes her to his hometown of Snow Falls. While the story may sound familiar, Christmas Inheritance isn't based on a true story, but that doesn't make it any less interesting, in my opinion.

Ellen's story begins when she ends up on the front of a tabloid magazine after doing a backflip into a Christmas tree at a Toys for Tots drive. It's easy to imagine seeing someone make a fool out of themselves at a holiday event (please see any office Christmas party ever). But as an heiress, that also means you could end up on the cover of a magazine with the full details of your exploits on display — which is something that Ellen learns about the hard way.

In this movie, Ellen's father is determined to teach her a lesson and Ellen is determined to prove she can be responsible enough to run his company. Therefore, she heads off to Snow Falls where she has to deliver letters to her Uncle Zeke, her father's former business partner. However, that turns out to be much easier said than done.

Once she gets to town, her suitcase falls open into the middle of the street. Then when she arrives at the town's inn, she finds out that her uncle has just left. (Figures!) Regardless, Ellen decides to stay, but then the town is hit with a massive snow storm, which really shouldn't be all that surprising in a town called Snow Falls. This leaves Ellen stranded, much to her fiancé's chagrin, who's waiting for her back at their home. But don't expect to get too attached to these two characters as a couple, since it seems like Ellen will find a new love interest in Snow Falls, because of course she does. (It wouldn't be a holiday movie without a little meet cute romance.)

To add to the drama, Ellen also hides her true identity from everyone at the inn, including her new love interest, so she can be treated like a "normal person." (Yeah, I'm sure that lie won't blow up in her face later on or anything.) But that's besides the point, because over the course of the movie Ellen will most likely learn that there's more to life than just being CEO of a company and she'll come out of Snow Falls with a new appreciation for the little things. Maybe she'll even have a new fiancé. But hey, I'm just guessing here.

No matter how predictable Christmas Inheritance may be, it definitely has all the necessary components to be just as big of a hit as Netflix's other Christmas movie, A Christmas Prince. The Hallmark-esque film became a surprise hit, with some people even watching the movie everyday since its release. While that story had a different plot, the main facets of the film are pretty similar to Christmas Inheritance.

More Like This
The Best Family Movies & Shows Coming To Netflix October 2022
Exclusive: Three Siblings With Super Powers Protect National Parks In Spirit Rangers
'Hocus Pocus 2' Gives Us A Glimpse Of The Sanderson Sisters As Kids
Disney+ Just Added A New Sing-Along Version Of The Nightmare Before Christmas