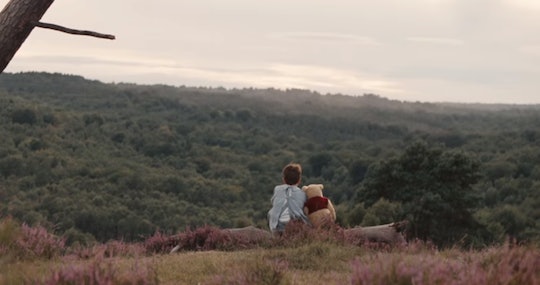 Disney's Winnie the Pooh is the latest character to get the live-action reboot treatment, and while the original cartoons were obviously meant for children, the newer films can be hard to predict. Parents may have a hard time judging from the trailers whether Christopher Robin is appropriate for kids under 5, or if it's more like 2004's Finding Neverland, which was a far cry from the original Peter Pan. From the reviews, it's clear that different people, based not only on age, but their own personal family experiences, are interpreting the movie very differently.

The film — which hit theaters on Aug. 3 — centers around an adult Christopher Robin (portrayed by Ewan McGregor), who now has a job and a family of his own, and has nearly forgotten about his anthropomorphic childhood toys, according to IMDb. The film makes use of a familiar trope: the overworked father whose family takes a backseat to his career. These days, Christopher Robin spends all him time toiling away at a luggage company, completely neglecting his wife, Evelyn, and their young daughter, Madeline, according to The Verge.

He even stays behind while his family goes on vacation, which is when his old pal Pooh shows up to ask for his assistance locating his missing friends. You can probably guess what happens next, and how you and your family will handle it. According to TIME, Christopher Robin is too busy to play with toys, and Pooh acts as an avatar for the neglected Madeline, eventually showing his human friend that growing up doesn't mean you have to let go of your sense of whimsy, and that it's important to hold on to your loved ones.

TIME applauded the film's "charming, low-key vibe," judging the mild slapstick and Eeyore's amusing one liners as "good for kids," and alluded to only "a trace of adult melancholy." Meanwhile, Fatherly wrote that the movie shows the world of Winnie the Pooh "through an adult lens," and while conceding that it's probably OK for anyone ages 4 and up, "be warned: it is very sad."

It seems that Christopher Robin took a page from the Pixar playbook; while children came away movies like Up, Inside Out, and the Toy Story sequels remembering only the goofy moments and silly jokes, parents saw tragedy and loss. So if you're an adult who had a rough childhood, or perhaps some guilt over how much attention you're able to give your kids, Christopher Robin might tug at your heartstrings. Older kids, particularly sensitive ones, and those with experience in the neglect department, might also empathize with Pooh and Madeline in a way that could hit a little too close to home. But the symbolism of the film will probably go right over the heads of younger kids, who will only see a talking teddy bear, and probably won't even notice all the sniffling adults in the theater. And it is a Disney film, after all, so it's probably not a spoiler to assure you that there is, indeed, a happy ending.

As for the other stuff that parents might object to, Motion Picture Association of America gave Christopher Robin a PG rating "for some action," the details of which are available on Common Sense Media. That site advises parents that the film is best for kids ages 8 and up, but I personally feel that their recommendations always skew a few years too high for my family's needs; your mileage may vary. What I find helpful is the breakdown of different aspects of the films. According to Common Sense Media, the "action" the MPAA refers to, apparently, are some brief, clean scenes of the titular character fighting in World War II, and some stuffed toys getting hit — but not injured — by a car.

So if you feel your 5-year-old can handle that, by all means, take them to see Christopher Robin. Just bring some tissues for yourself.