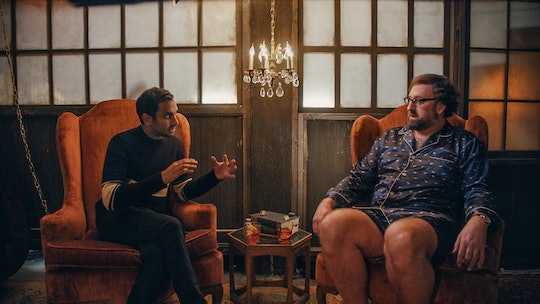 'Master Of None' Gives Dev A Cool New Job

Warning: Season 2 spoilers ahead! If there's one thing we know about Dev in Master of None, it's that he loves to eat. That, and aside from "finding himself" is basically why he's living in Italy when we see him again in Season 2. Dev is three months into his Italian holiday, working in a pasta shop in Modena. But then he gets offered a ridiculously cool gig: he becomes the host of Clash of the Cupcakes, when he's back in New York City, a competitive show about, well, making cupcakes. But you won't find that anywhere on Netflix, since Clash of the Cupcakes is definitely not a real show. But it is a spoof of Cupcake Wars, which is a real show, along with numerous other competitive cooking shows out there.

It's also a little more than that — nothing is accidental in Aziz Ansari's world. That he finds work on a wild, silly, TV cooking show after working in Italy, "putting his heart and soul into the pasta," as his character Dev puts it, follows the whole theme of the season. Basically Dev is just trying to figure out what the heck he's doing with his life. While eating everything in sight, of course.

It's not all fun and games, though. The show tackles some pretty big issues, like online dating, race, and religion again. In Season 2, Dev goes a little further than in the first season, even telling his parents (yes, they're back!) that he eats pork and doesn't mind being not-so religious. That really upsets his mom, though she's OK with him being "that guy" from the Clash of the Cupcakes.

Ansari is serious about making sure the show is funny and smart. He told The New York Times that Netflix really wanted him to start making another season right away, but he told the network that was totally worn out. "I dumped all my ideas in the first season," he said.

But then he and the show's co-creator Alan Yang finally sat down and made a list of what they "felt best about" from the first season. The episodes that really stuck out were "Parents," which won an Emmy for portraying how it feels to be a child of immigrants, and "Mornings," which was all about relationships. Ansari told The New York Times, "We wanted all the episodes of Season 2 to have that level of ambition."

Already, the good reviews are coming in for the second season, so Ansari definitely nailed it. Again. And here's hoping we'll be able to check out Dev's hosting skills in action on Clash of the Cupcakes if this becomes a job that sticks.