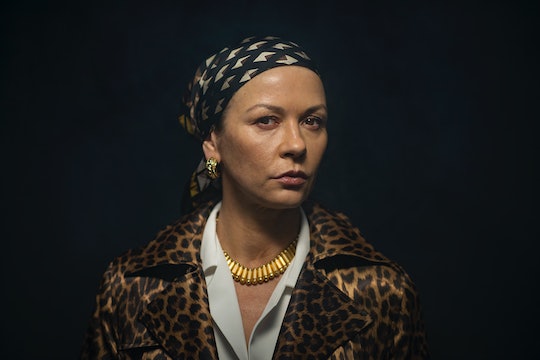 Catherine Zeta-Jones stars as Griselda Blanco in Lifetime's upcoming movie Cocaine Godmother: The Griselda Blanco Story, playing a drug queenpin whose story is so wild you'll almost definitely find yourself wondering if it's all true. But Cocaine Godmother is based on a true story, so even with dramatic license, there are definitely some facts forming the foundation of the movie.

Premiering on Lifetime on Saturday, Jan. 20, Cocaine Godmother follows Griselda Blanco's story from beginning to end. She became a pioneer of drug trafficking in the '70s and '80s, inventing new ways to smuggle drugs from her native Colombia into the United States, where she lived in Queens, New York and Miami, Florida at various times. She earned herself the nicknames La Madrina (the Godmother) and the Black Widow, after two of her husbands ended up dead. According to Lifetime's official synopsis of the film, it was suspected that she was responsible for the deaths of upwards of 200 people, but she evaded capture for years.

She finally did end up behind bars in 1985, but it was for her involvement in the drug trade, not for murder. She was released in 2004 and deported to Colombia, where she was assassinated in 2012 while out running errands. Blanco's story has inspired several fictionalized depictions, but at the end of the day the truth might be even more shocking.

Blanco first became involved in smuggling cocaine when she met Alberto Bravo, the man who would become her husband. Professor Bruce Bagley, who wrote Drug Trafficking In The Americas was quoted in The Sun as saying:

They emigrated to Queens and got married. There, the couple masqueraded as clothes importers, knowing that with their Colombian connections they could capture a huge market share by undercutting the Italian Mafia, who at that time controlled distribution in the city.

Blanco and Bravo became incredibly successful at what they were doing, and Blanco was a big part of that. She would employ young women, often sex workers, to be drug mules and even developed unique lingerie to allow them to secretly hide large amounts of cocaine on their bodies while traveling. Bagley continued:

She was quite the innovator. Blanco came up with the idea of creating customized bras and girdles with hidden pockets to hold cocaine. She also established a specialist lingerie shop in Medellín, the sole purpose of which was to tailor-make drug-smuggling underwear so that her army of mules could get the cartel's product into the U.S.

According to The Sun, Blanco became convinced that her husband was going to turn against her, so she confronted him in a shoot-out that resulted in his death. She allegedly ordered a hit on her next husband, Dario Sepulveda, as well, earning her that Black Widow nickname.

Meanwhile, her illegal business thrived. She had relocated to Miami, where she lived in luxury until her 1985 arrest on drug charges. Though she was indicted for murder nine years into her sentence, she only earned an extra 20 years — of which she served another nine years before being released in 2004. Vice reported that prosecutor Katherine Fernandez Rundle had to seek a plea bargain regarding the murder charges because of a scandal involving Jorge "Rivi" Ayala, a hitman formerly on Blanco's team.

Apparently, Ayala had been having phone sex with two secretaries at the Miami-Dade state attorney's office while he was behind bars. According to the Associated Press, because Ayala was a witness in Blanco's murder trial and the secretaries had access to key files, it threatened the whole case.

After her release, Blanco returned to Colombia, where she lived until she was killed in a drive-by motorcycle shooting. Former Miami homicide detective Nelson Andreu told the Miami Herald, "It's surprising to all of us that she had not been killed sooner because she made a lot of enemies. When you kill so many and hurt so many people like she did, it's only a matter of time before they find you and try to even the score."

Viewers curious to learn more about Blanco can check out Cocaine Godmother. Blanco's story is tailor-made for the screen, but hopefully the movie stays true to the facts.