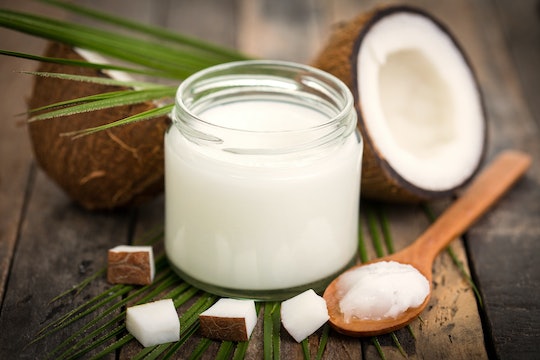 Everyone Is Freaking Out About Coconut Oil Again, So Here's What You *Need* To Know

For a while there, coconut oil was hailed as the perfect answer to many of life's problems. Dry skin? Try coconut oil. Hair breakage? Coconut oil. Need to sauté something? You guessed it, coconut oil. But the so-called benefits of this wonder oil have recently been called into question. Is coconut oil bad for you? One Harvard professor thinks so and science seems to be on her side, at least for the most part.

A recent lecture by Professor Karin Michels of Harvard University — given in German and later translated into English — in which she calls coconut oil "pure poison," has gone viral and sparked public interest in the substance once again. The video of the lecture, entitled "Coconut oil and other nutritional errors," has since generated almost 1 million views, according to USA Today. Michels, who serves as an adjunct professor of epidemiology at Harvard T.H. Chan School of Public Health, repeatedly calls coconut oil "poison," in the video. "I can only warn you urgently about coconut oil," she says. "This is one of the worst foods you can eat."

But just how valid are her claims against the popular oil? Well, I wouldn't be scooping heaping a spoon-full of it into your frying pan, but it isn't exactly the food devil that Michels believes it is, according to other experts.

Another "benefit" of coconut oil is its supply of antioxidants. And while it does have them, fruits and vegetables offer much more without the drawbacks. As Tom Sanders, emeritus professor of nutrition and dietetics at King’s College London, told The Guardian, “It is a poor source of vitamin E compared with other vegetable oils. Coconut oil is also deficient in the essential fatty acids, which makes it much worse than lard or palm oil.’’

Not all coconut oil is created equally, though, according to The New York Times. Dr. Tom Brenna, a professor of human nutrition at Cornell University, told the Times that virgin coconut oil is more gently processed and therefore might have less harmful effects than highly processed versions of the oil. Processing in high heats can destroy essential fatty acids and antioxidants in the substance, making it even less beneficial to consume.

Like many other oils, coconut oil is high in calories and can cause weight gain if consumed en mass. A single tablespoon has 120 calories, according to CNN. Dr. Walter C. Willett, professor of epidemiology and nutrition at the Harvard T.H. Chan School of Public Health — the same school where Michels is an adjunct professor — told the outlet that it falls about in the middle of the healthy-unhealthy scale:

Coconut oil is somewhere in the middle of the spectrum in terms of types of fats. It's probably better than partially hydrogenated oils, [which are] high in trans fats, but not as good as the more unsaturated plant oils that have proven health benefits, like olive and canola oil.

In fact, the American Heart Association advises against using it at all due to its saturated fat content. The AHA recommends eating six percent or less of your daily calories in saturated fat. As coconut oil has "no known offsetting favorable effects," according to the AHA, the saturated fat should be enough to lead you to choose a different oil to fry your eggs in. Overall, it would appear that coconut oil isn't the superfood that many thought it was, but I wouldn't go so far as to call it "poison."