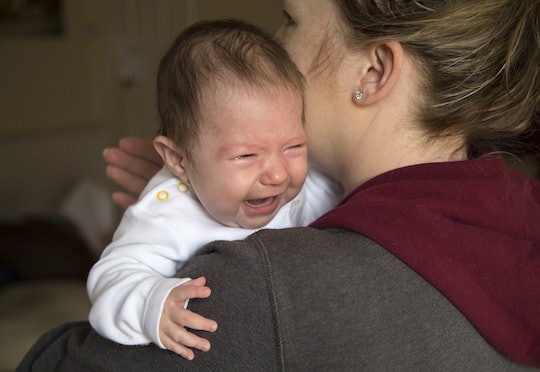 Is Colic Genetic? It's Something Many Parents Wonder

Parenthood comes with a mix of blessings and curses, and colic definitely falls into that second category. After all, few things are more distressing than a baby who won't stop crying at any time. When you're thinking about the future health of your baby, it's normal to wonder is colic genetic. Because if you or your SO was a colicky baby of legendary proportions, then you may be concerned about whether your own child will be prone to these long crying jags.

For starters, it's smart to understand the basics of colic before diving into its potential hereditary components. According to Baby Center, babies with colic have bouts of uncontrollable crying that can last more than three straight hours. As further explained by Baby Center, colic is most common in babies who are under five months of age, and it typically does not indicate any long-term health conditions. That said, colic is still quite a trial for many infants and their caregivers alike.

So is colic passed on through your genes? Probably not. As explained by What To Expect, colic is likely not genetic, as far as the condition is currently understood. Unfortunately for parents of fussy babies everywhere, the exact causes of colic are still unknown. According to the American Pregnancy Association, colic may be the result of anything from a sensitive temperament to overfeeding. In any case, the factors that may contribute to a baby's colic are still largely speculation. At the very least, your genes are likely not the culprit.

Unfortunately for a colicky baby's caregivers, theorization is not helpful when you're trying to soothe your little one at 3:00 a.m. You don't particularly care why your baby is crying, you just want some relief. That said, there are some ways you may help ease your baby's colic, even if no one fully understands its root cause yet. As noted in Parents, a colicky baby may be soothed by a car ride, white noise, or swaddling. Moreover, diet may play a part in this condition. To ease colic, it may be smart to change up your baby's diet, burp your baby more often, or try a different type of bottle, as explained by the Mayo Clinic. Whatever techniques you try, remember that for most babies, the colicky phase is relatively short-lived (although those long nights with a crying baby feel like they drag on forever). Hopefully you and your baby will overcome the colic soon enough.