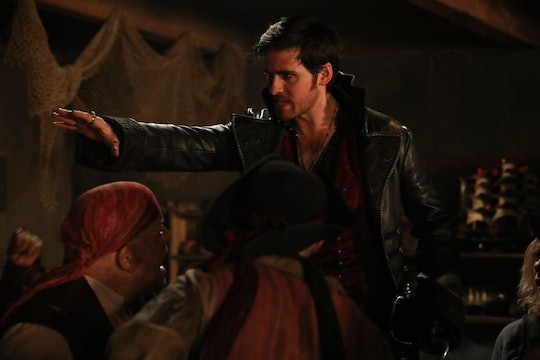 Hook's Singing Abilities May Surprise You On 'OUAT'

Get ready to sing Oncers! The Once Upon a Time musical episode is almost here and the music is sure to get stuck in your head and make you want to sing along. The new episode will contain seven original songs sung by the cast, but some fans may be wondering if the cast can actually sing, especially when it comes to our favorite swashbuckling pirate in Storybrooke: the one and only Captain Hook. So is Colin O'Donoghue really singing on Once Upon a Time? It turns out he really is, and moreover, he actually has an impressive set of pipes.

In fact, if you go on YouTube and type in O'Donoghue's name, you'll find a wide gambit of videos of him singing and showcasing his talent. O'Donoghue is a great singer in real life, which will definitely be made evident in his OUAT performance. (As if we needed yet another reason to love him, right?)

During a recent interview with Entertainment Weekly, executive producers Adam Horowitz and Edward Kitsis revealed that the music — which was written by Alan Zachary and Michael Weiner, and composed by OUAT composer Mark Isham — are tailored to fit each character that sings. For example, Hook's song, "Revenge Is Gonna Be Mine," is all about his pirate life (naturally) and his ongoing thirst for revenge against Rumple, whereas Snow and Charming's duet, "Powerful Magic," centers around the concept of true love. Almost everyone in the cast will sing in the musical episode, including Emma, Regina, Zelena, Henry, Granny, Grumpy, and Geppetto.

As for why the characters will be swept up in the music, it's all because of a wish, apparently. According to the episode description, Snow and Charming made a wish (via a flashback) to ensure that Emma would be safe and for some reason that wish causes every one to sing. Naturally, the Evil Queen isn't a fan of all the singing, but that doesn't stop her from singing as well.

The incredible music isn't the only thing to look forward to in Sunday's new episode, however. The main event will be Emma and Hook's wedding, which will definitely happen despite the Black Fairy's continued presence in Storybrooke and the looming "Final Battle."

Kitsis stated during the same Entertainment Weekly interview that Emma is taking her mother's advice to "live her life," and not worry about the future and what it could bring. The idea of the musical was purposefully centered around Emma's wedding and will relate to her overall character journey in some way. "Each song is constructed in a way that's dealing with what's going on with the characters and what's going on with the story," Horowitz added. "We're trying to move toward something. It builds to that wedding, which — like everything in the episode — we hope is filled with a few other surprises."

You can discover what those surprises are when Once Upon a Time airs on ABC on Sunday, May 7 at 8 p.m. ET.