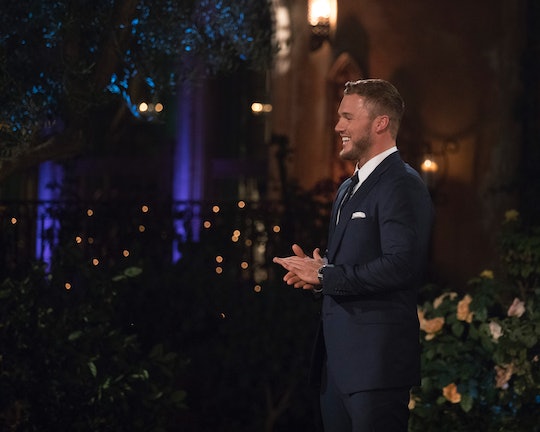 Colton's Virginity Keeps Coming Up On 'The Bachelor'

Colton Underwood first revealed he was a virgin when he was a contestant on Becca Kufrin's season of The Bachelorette, but the topic has come up constantly in the promotional material for his solo season of The Bachelor. After countless dates, fantasy suites, and possibly a proposal, some viewers might be wondering: is Colton still a virgin?

That's a question that won't be answered until much later in his run on Season 23 of The Bachelor, which begins with a three-hour premiere on Jan. 7. Colton was approached by TMZ earlier this month, but when asked if he was still a virgin or not, he said that it was "one of those things that you're going to have to tune in" to find out about.

It seems Colton was a virgin when the season began, with host Chris Harrison informing Extra that Colton's "V-card is still intact." He didn't know if the same would be true as the weeks progressed, however. He also noted that Colton would explain his choice not to have sex in more detail on the show, alluding to "prior relationships and situations" that led to the decision. Colton's virginity has begun to define his time on the Bach franchise, but the bigger question is: should it?

I'll make the answer easy: no. Colton has managed to reach his mid-20s without having sex for whatever reason and that's really not a big deal; in fact, according to Vice, millennials "generally have fewer sexual partners than previous generations." It's fairly common to wait to have sex, but even if it wasn't, it shouldn't be an issue. As Colton himself told People, being a virgin is just one small part of who he is.

In the same interview, he went on to say, "It's a decision I consciously made, but it's just something that makes me into who I am." He noted that there was a stigma, especially around athletes, and he thought it was better to try and break those whenever possible. But he was also aware of outside pressure, especially when it came to the fantasy suites. He knew viewers would be curious to see how they went, since there's usually a chance that the prospective couple could have sex when left alone off-camera for the first time.

But while Colton was aware of that, he didn't seem particularly bothered by it. He was looking forward to using that time to get to know the women he was dating. He planned to "treat it like another date, an opportunity to get to know someone on an intimate level." He did tell Entertainment Tonight that having sex was a possibility on the show, provided he find the right person and felt like it was the right time.

"I'm waiting for someone that has the right heart," Colton said. "I’m waiting to be madly in love with somebody, so if that happens by the time fantasy suites comes around, so be it." Colton might still be a virgin after The Bachelor, but either way, it's his business and his decision.