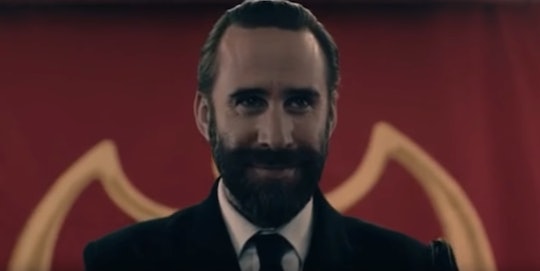 Is This Character REALLY Dead On 'The Handmaid's Tale' Or Are We Being Trolled?

In what was one of the most crucial turning points in The Handmaid's Tale so far, the new Ofglen planned a surprise attack on the commander’s brand new Red Center. The bomb she planted took out numerous handmaids and commanders, including Commander Pryce, but what about the man who holds June’s fate in his hands? He was giving a speech at the time of the bombing, but is Commander Waterford dead on The Handmaid’s Tale?

Despite being in such close proximity to the explosion, Commander Waterford survived the bombing. The seventh episode of the season, “After, starts out with a creepy, all to to perfectly choreographed funeral for the handmaids that inadvertently died in Ofglen's attack. Somehow, Fred Waterford made it out alive, but after sustaining some serious injuries, he is laid up in the hospital, with his wife Serena at his bedside. His odds of a full recovery look pretty good, and I’m sure he’ll have a large part to play in stabilizing the government and restoring the future of Gilead.

While he recoops in the hospital, Commander Pryce’s replacement, Commander Cushing, is taking a scorched earth approach to find and eliminate the people who helped Ofglen perpetrate the attack. As June and the other handmaids return from the funeral, they see the streets scattered with hanging bodies, including numerous marthas and Ofglen’s host family (Commander Deeds and his wife). After lining the streets with corpses, Cushing comes to the Waterford house to interrogate June about her kidnapping, insinuating that it was really an attempt to escape orchestrated by the Waterfords. Of course, June knows the repercussions of admitting the truth would be dire and straight out deadly, so she sticks to the helpless, kidnapping victim shtick.

When Serena comes home from the hospital that night, June tells her about Cushing’s visit, and reminds Serena that Fred, who’s barely able to move or speak, will be unable to help protect the family from the investigations. So, in her true callous and calculated style, Serena drafts up warrants for Cushing’s arrest with Nick’s help, even forging Fred’s signatures on the documents. When Cushing arrives at the Waterford house soon after, Commander Warren (Janine’s baby’s father) and a team of armed guards arrest him and strip him of his command “by order of Commander Waterford” on charges of apostasy, treason, and aiding terrorists. Well played, Serena, well played.

In what looks like a combination of a power trip and a move for self-preservation, Serena draws up more orders. She tells June that she has drafted “new security orders” to scale down guardian presence and remove unnecessary checkpoints so that things can return to normal after the bombing. The weirdest twist to her whole plan is that she asks June to read over and edit the documents, handing June a pen in the final, and most meaningful moment of the episode. Because a pen is mightier than a sword, especially when there’s a woman yielding it.

So at the moment, Commander Waterford may not be dead, but just like his health, his power and influence are immensely fragile. Luckily for him, he has a tough wife that has taken the reigns -- albeit through forgery -- to preserve his position and protect his family. But it looks like there will be repercussions. In a sneak peek of episode eight, Fred seems to be home from the hospital, and it looks like he’s getting ready to reprimand Serena for taking matters into her own hands. No matter what their status, in Gilead women don’t really matter, but seeing Serena suffer a little might feel like poetic justice, after all, she was the mastermind behind this hedonistic value system anyway.