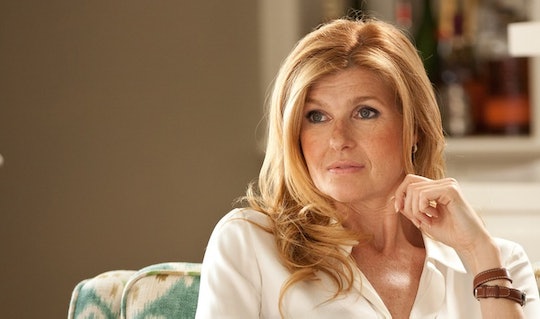 And just like that, Rayna Jaymes is gone from this world. In a twist that I doubt many fans saw coming, the country superstar died on Nashville during Thursday night's heartbreaking episode and it's almost too devastating to believe. She has been the main star of the series since Day 1. What will the show even be like without her? And more importantly, does this mean Connie Britton is leaving Nashville for good? Unfortunately, that seems to be the case.

While normally I'd try to convince you (and myself) that there's still hope the actress will return, Britton recently spoke with Entertainment Weekly confirming that her days on the show are numbered and that Rayna's journey has come to a close. "When I read the scripts I was like, 'Okay, here we go.' It was very surreal and not easy," Britton explained about her character's fate. "There was definitely a big part of me that was not ready to go but there we were. I wanted to make those moments as strong as possible for Rayna." And while it's possible we'll still get to see Rayna in a few upcoming flashbacks, she will no longer be a central focus to the show. And just in case you needed another reason to burst into dears, Britton also took to her Instagram account to post a heartfelt message to all of her Nashville fans.

And since a summary just wouldn't do this message justice, I'll go ahead and leave the entire caption below for you to cry your way through:

Thank you Rayna Jaymes. For your magic and your dignity. And thank you to all the creators of Rayna Jaymes, for there were many. Callie Khouri, who gave her life. Deacon, Maddie, Daphne, who shaped her as her family. Teddy, Tandy, Lamar too. Juliette, Scarlett, Bucky and the ones who crafted her into a business woman. Along with countless other compatriots and combatants. And then of course the crew of “Nashville" who brought her to life, every crew member in every department who made Rayna live each week.

And then there’s the music. T Bone, Buddy, Tim, Frankie and all the brilliant songwriters who gave Rayna a voice. There was no music, and no Rayna, without you.

But finally and most importantly, the fans. You made Rayna. You supported her and loved her and gave her inspiration just as she was able to inspire you. You were the energy source, the power behind her heart and soul and life. Rayna lived for you. And, from the depths of my heart, I thank you, for her and for me. It has been an honor to be a part of that creation. And as I know she would want it, the show must, and will go on. Long live Rayna Jaymes. #RIPRayna #NashvilleCMT

Suffice to say, this certainly feels like an official goodbye. And while I'm certainly going to miss listening to that beautiful voice of hers each week, I have a feeling it won't be long until she's back on our TV screens again. Because when you have a talent like Britton on the loose, it's only a matter of time until she's offered a new project. And even though Rayna may be gone, her memory on this show will never be forgotten.