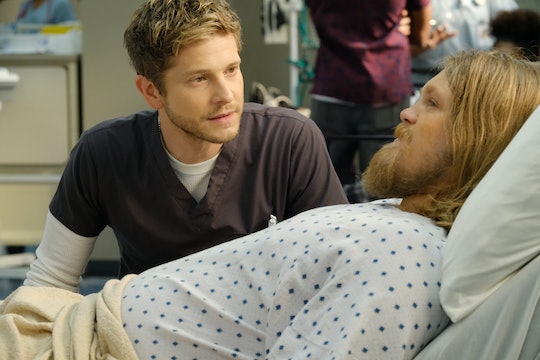 Conrad Hawkins From 'The Resident' Is The New McDreamy

I hope you have your tissues ready because FOX is debuting a new medical drama about a group of young doctors as they try to deal with what really goes on behind the scenes in hospitals. One of these doctors is played by Gilmore Girls and The Good Wife alum Matt Czuchry, who takes on the role of Dr. Conrad Hawkins. But is Conrad Hawkins from The Resident based on a real person? The character may be fictional, but the stories about the truth of the health care system are all too real. If you're ready to get your heart broken, and learn some disturbing things about the medical field, I'd recommend giving the show a watch.

The previews alone should give you a pretty good idea of what kind of doctor the show is dealing with here. Dr. Conrad Hawkins is a brilliant and principled (though sometimes offbeat) doctor who really cares about his patients. (Who knew throwing a bucket of ice water on a patient's head could be such an effective remedy?) As the star of the show, Conrad leads his colleagues and subordinates as they try to fight the medical establishment, which is driven not by caring for people, but by money. I have a feeling audiences are going to fall in love with Czuchry all over again — so don't throw away those Cary Agos/Logan Huntsberger posters just yet.

The official Twitter account for The Resident posts videos with short profiles of the series' main characters, including Conrad. He is a caring and talented doctor who cares more about the people he's helping than the business aspect of the hospital. Costar Shaunette Renée Wilson, who plays Dr. Mina Okafor, describes Conrad as being all "about saving lives. He's not about the business side of this hospital." Czuchry says that his character is a hero for the little guy, and that's one of the major things that drew him to the role.

But don't worry, that other mainstay of hospital dramas is present in this show as well — romance. Conrad has a will-they-or-won't-they relationship with Nurse Practitioner Nic Nevins, played by Emily VanCamp from Revenge. While Conrad is emotionally unavailable, Nic is just the opposite. So that means lots of tortured storage-closet make-out-sessions which you all know I am totally here for. Fictional or not, doctors have personal lives just like the rest of us, though I'm sure Dr. Conrad's are a little more dramatic than the average bear.

The characters in the show may be imagined, but that doesn't mean the world they portray isn't accurate. The show's stated purpose is to pull back the curtain on the medical world, revealing the occasionally seedy underbelly of the business side of hospitals. In a press release, the show's creators note that medical error is the third leading cause of death in the United States. With this disturbing (and true) statistic in mind, The Resident attempts to tell the real story of medical dramas, and what might be going on behind these medical decisions that you don't even know about. (With a healthy dose of relationship drama for good measure.)

But it's not all doom and gloom at the hospital. The show's leads, including Conrad, Mina, Nic, and rookie Dr. Devon Pravesh (played by Manish Dayal) are all fiercely committed to doing the best by their patients, and truly trying to save lives (even if they sometimes run into problems from the powers that be). As Conrad memorably says, "I wanted to be a person that could help people. So that's what I do." I'm just going to put it out there. Czuchry can save my life any day (maybe with actual medical supervision though).