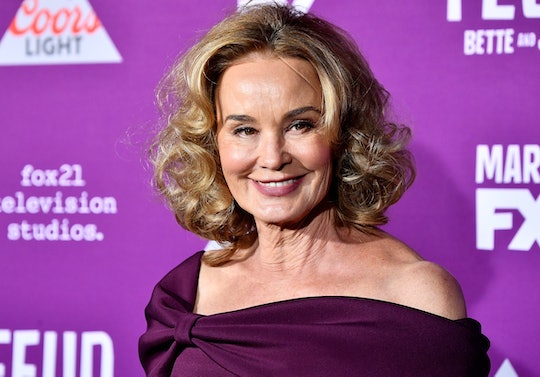 The witches of American Horror Story: Apocalypse are trying to dig up dirt on their chief antagonist Michael Langdon by taking a trip to the place where he was born: Season 1's titular Murder House. There they'll learn the secrets of his past, including what happened to his grandmother Constance. She hasn't been seen in the present at all, so it's possible she didn't survive to see the end of the world. Is Constance Langdon coming back as a ghost on AHS: Apocalypse?

When Michael's mother Vivian Harmon died in childbirth at the end of Season 1, Constance took it upon herself to raise him — after getting his adoptive father out of the way first, of course. After poisoning her relationships with all of her own children, Constance wanted to do things right with Michael, even if it meant covering up for him when he murdered his babysitters. She seemed devoted to him in Season 1, so why hasn't she merited a mention from Michael in Apocalypse? He was shown spending his teenage years with a foster mother named Miriam Mead, citing her as the one person he loved and trusted above all others. Not Constance.

He specified that Miriam was the only one who had never betrayed him, which could mean that Constance did. That unknown betrayal may have cost her her life, trapping her spirit in the Murder House for eternity. That's one theory, at least.

Constance will definitely be back, but the circumstances of her return are less clear. It was confirmed by several outlets, including The Hollywood Reporter, that Jessica Lange would be reprising her role, but details about Constance's life post-Murder House have been scarce. There's always a chance that she merely appears in flashbacks of Michael's childhood. However, a brief hint of Lange in the trailer for Episode 6 indicates that she's not just limited to flashbacks.

When Madison and Behold arrive at the house to investigate Michael, they come into contact with Constance. Though the promo stops just short of showing her face, you can see her from behind while she asks, "Who do you think you are?" Madison answers that they're the new owners of the house. It's a short scene, but it actually provides a lot of information.

The house looks almost abandoned when Madison and Behold arrive, and it seems like they were able to purchase it easily. That means that, presumably, no one was living there before they got there. So why was Constance there, looking perfectly at home? She did used to own the house herself, but those days are long gone; she was the next door neighbor back in Murder House. She could have just been caught while she was stopping by for a visit, but maybe her soul has actually been stuck in the house.

Something had to have happened to Constance for Michael to leave her care and be placed with Miriam. His comments about trust are also ominous; if Miriam is the only woman he ever trusted, then it means he didn't trust Constance. Michael has no qualms about killing people, so if Constance offended him in some way, he very well might have killed her and trapped her in the house with her other children.

There isn't a lot of confirmation one way or the other about Constance's ghostly status, but something awful must have happened to her to make her the dark secret in Michael's past.