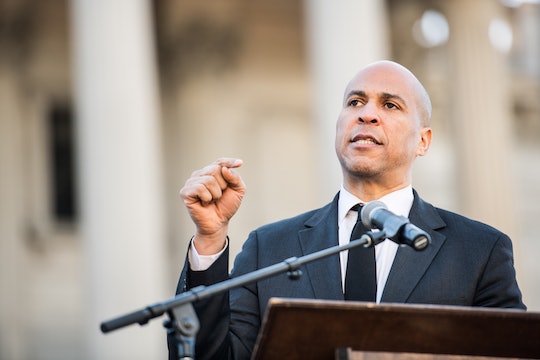 Is Cory Booker Married? The 2020 Presidential Candidate Has Some Unique Qualities

With so much on the line for Democrats in the upcoming presidential election, choosing the right candidate is going to be a big deal, and on Friday, New Jersey Sen. Cory Booker officially announced he's ready to launch his campaign to be the nation's next POTUS. Booker released a video Friday morning sharing his decision, and in it, he vowed to bring the nation together for change. But while he's joining a number of other Democrats who have already announced their intentions, there are some details that help him stand out. For instance, if you're wondering if Cory Booker is married, it may surprise you to learn that the New Jersey Democrat is not only the youngest senator currently vying for the nation's top spot at only 49 years old, according to CNN, he's also unmarried, which makes him pretty unique as far as presidential candidates go.

Though we may be used to candidates campaigning alongside their families, and presidents moving into the White House with their wives and children in tow (being First Lady has essentially become a political role in itself, after all), Booker will actually be running for office as a single man, reflecting one of the many ways that the group of candidates running for president in 2020 is actually far more diverse than in years past.

Although Booker's political experience and platform should obviously be the most important element of his campaign, the reality is that pretty much all details about a candidate's life matter, and are fair game for analysis. And given the fact that the last time the nation elected an unmarried man to the White House was all the way back in 1886, according to The Washington Post, it's not entirely surprising that Booker's marital status sets him apart.

For one, if Booker were to be elected president, he'd become only the third man to do so without a spouse, according to The Philadelphia Inquirer. Yet it doesn't exactly sound like that fact bothers him even slightly. In an interview in December, Booker addressed the issue, and said,

Clearly the norms of family relationships have been changed dramatically as you've seen people across this country being elected to offices with all different kinds of family situations, including [President Donald Trump] who has had three spouses. So I think a lot of that conventional thought on that doesn’t apply.

That doesn't mean though, that he isn't left to still face rumors or speculation about his personal life due to not having a partner standing behind him at rallies. For one, NJ.com noted that the former Newark mayor — and New Jersey's first black senator — has been asked multiple times to clarify his sexual orientation (he's straight, though in 2013, he told The Washington Post he ultimately didn't mind if people assumed otherwise, as he "[wants] to challenge people on their homophobia"). But he's also had to address questions about why he has yet to settle down, since apparently, being a single 49-year-old man requires an explanation.

For Booker's part it does sound like it wasn't necessarily his first choice to remain unmarried, and he's even joked about his single status, according to Buzzfeed, having once responded to a comparison between him and former President Barack Obama by quipping that the difference between them was that Obama is "married to an amazing woman and has two kids," while Booker "[has] dead plants and fungus growing in [his] fridge."

More recently though, in a Sept. 2018 profile in New York Magazine, Booker took a more serious stance, and said,

I'm single. It's tough to date as a senator. And I think that I've come to a point in my life where I understand that the things that are most valuable are obviously your personal relationships and … the title I seek the most is probably husband and father. And I hope that that happens and that I get a chance to have what seems to be the most gratifying experience of so many of my friends.

Of course, though Booker's single status definitely seems to intrigue people, it's far from being particularly important or newsworthy — especially when we're talking about someone who could potentially be the next president. So what do you *actually* need to know about Booker, and what he stands for? Though he'll inevitably be seeking to amplify his political message in the coming weeks and months, CNBC has noted that, among other things, Booker has advocated for criminal justice reform throughout his career, and has emphasized the need to address income inequality to boost the well-being of Americans.

But according New York Magazine, it's also likely that Booker's message with be one that highlights ideas like kindness, empathy, and being an earnest and heartfelt candidate to stand in contrast to Trump's highly-polarizing presidential style (and honestly, we could probably all do with a bit more of that these days). So while Booker's bachelor status may be rather unusual, it sounds like he has a lot to offer Americans that has little at all to do with his dating life. And given the election's importance, it seems his actual message and political platform is what we should be paying most attention to.