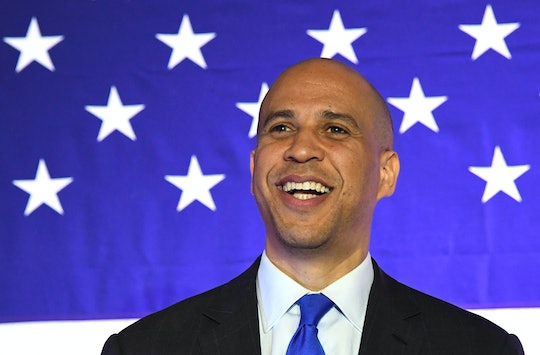 Since announcing he was running for president, many voters have likely been curious about New Jersey Sen. Cory Booker. Where does he stand on the key issues? And what does his life outside of politics look like? For example, many may be curious as to whether Cory Booker is married because he often gushes about a special lady in his life.

Although the 50-year-old Democratic senator is not married, he's been in a relationship with RENT actress Rosario Dawson for quite some time now, according to People, which also noted that the couple confirmed their relationship status to the public back in March. In fact, Dawson recently joined Booker on the campaign trail in Nevada, according to The Washington Post. And considering the sweet and heartfelt things the presidential hopeful says about Dawson, it seems safe to assume that Booker loves her company and support while dealing with potentially tense and tough moments on the campaign trail.

For example, during a June appearance on RuPaul's talk show, RuPaul, Booker had the loveliest things to say about his "boo" (yes, that's his nickname for her, as USA Today previously reported). According to People, Booker shared on the show that he writes love poems about Dawson, telling RuPaul: "When you have somebody in your life who inspires me as much as she does... She inspires me."

The story of how they met is actually quite sweet as well. According to Booker, the pair "first met at [a party for] a friend of ours running for governor of Maryland, Ben Jealous is his name, former head of the NAACP," he shared on the show, according to People. "We met at that party and she didn't give me the time of day. She did me some serious shade! And then we met at another friend's party, both of us were single at the time. It was a roof party of a dear friend and I had the courage to walk up to her and ask for her phone number."

And, as they say, the rest is history. The couple has been together for about nine months now, according to The Oprah Magazine, and Dawson is clearly head over heels for him, too. In March, she told TMZ that her relationship with Booker is the real deal. "I am just grateful to be with someone that I respect and love and admire so much," she told TMZ at the time.

Back in April, Dawson also spoke with Extra about her relationship with Booker, sharing: "It has meant a lot to me to know that he's running for the highest public office in America, and he's still centering us in our relationship, and prioritizing, ya know, creating our foundation."

If Booker and Dawson remain boyfriend and girlfriend for the foreseeable future, and should he be elected in to the White House, he would be the third president in the nation's history to not be married. According to CNN, there have only been two presidents who have been sworn in without being married: James Buchanan and Grover Cleveland, who later married in office.

Neither Booker nor Dawson have confirmed whether marriage is in their immediate future, but it's clear they both value their relationship together.