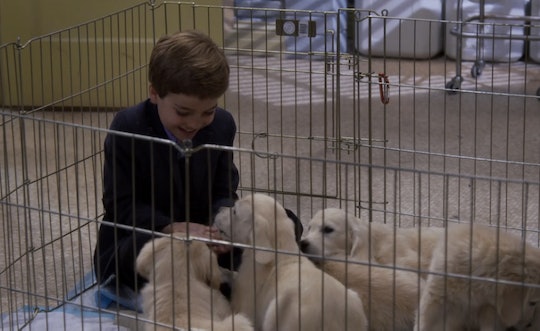 Is Cosmo Related To Comet? The Two Pups Have Quite The Connection

Every story has an unsung hero and when it comes to Full House that hero was Comet. Comet was the golden retriever that kept everyone in the Tanner household company (not like companionship was ever really lacking). In Fuller House, Steve, has a dog named Comet Jr., another golden retriever that has puppies and D.J. lets her son Max adopt one of them. But can Cosmo really be related to Comet?

In real life, obviously not, since Air Buddy, the "actor" who played Comet died in his sleep a while back. And in the alternate reality that is Fuller House, there's just no way Cosmo the new puppy and old Comet can be related. According to the interwebs, golden retrievers only live about 10-12 years, so it doesn't seem possible that any original puppy of Comet could have lasted the 29 years in between the two series, even if he outlasted the stats. Even in Full House-land.

But let's not dwell on facts. What's really important is just how cute Cosmo is. In fact, the entire adoption scenes in episode four sort of sells this entire series. To start, D.J.'s son Max is one of the sweetest kids on television. To adopt one of Steve's puppies at his mom's veterinary office, he puts on his finest suit and goes through an excruciating process to find the best fit for the family.

Even if you find precocious kids on TV sort of cringeworthy, you have to admire his methods. Max ends up spending most of the morning in a play pen at the clinic hanging out with the dogs. His choice does not come easy and who can blame him — he has a whole litter of fuzzy little pups to choose from. He ends up deciding on Cosmo because he's the "best licker." He even gives him the middle name T.D., which stands for The Dog. I've always wanted to get a dog and name it Dog and Max has now stolen my genius idea. Thanks, kid.

It's not just the puppies that will melt your heart in Fuller House. D.J. also "adopts" a new assistant at her office while Max is choosing his new BFF and he is cute. It's hard to not want D.J. and Steve to to reignite their flames, especially since their dogs are already related-ish, but Matt makes a darn good work husband. He's also as taken with D.J. as much as Max is with the pups. Steve and Matt are definitely going to have to duke it out. Here's to the new characters — canine or otherwise— all around.

Whoever wins D.J.'s heart, Comet Jr. and Cosmo are fun additions to the house. He's even technically potty trained. Like he sits on a toilet. Cosmo should definitely win a Golden Globe for his supporting role as Max's sidekick, even if he isn't technically family. Some things have to change in that house.