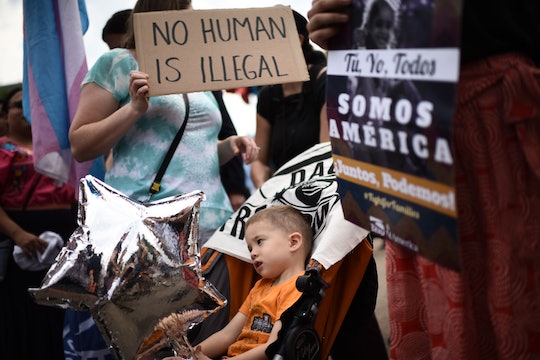 Yes, DACA Is Constitutional & Here's Why

Unfortunately, the Trump administration isn't wasting any time in undoing much of former President Barack Obama's legacy — or at least attempting to do so. From President Donald Trump's attempt to end the Affordable Care Act to ending environmental regulations, and so much in between, this year has been rife with a clear pursuit of ending as many Obama-era mandates as possible. And now, the White House has announced that Trump plans to end the Deferred Action for Childhood Arrivals program — commonly referred to as DACA — citing it as unconstitutional. So, is DACA constitutional and are these cited issues with the program totally unwarranted?

While Attorney General Jeff Sessions has called the program "an unconstitutional exercise of authority by the executive branch," as CBS News reported, the true legality of the program is a bit more complicated than he makes it out to be.

To understand this, though, it's important to understand DACA as a whole. The program, which was founded in June 2012, works to protect undocumented minors who were brought to the United States by their parents by deferring their deportation in two year intervals. By ending the program, the 800,000 DACA recipients, known as DREAMers, will be at risk of being deported to a country they may not even know. The argument that DACA is unconstitutional, though, is not only untrue, but also hypocritical.

As ThinkProgress reported, "The DACA program was created by the Obama administration through a 2012 executive action — that is, the executive branch relied on a combination of its own authority and the powers delegated to it by Congress in order to form DACA."

Legally speaking, DACA isn't unconstitutional, although it was executed in a controversial way. However, it isn't an unpopular program. A recent poll found that almost 60 percent of Americans approve of the DACA program, despite Sessions' claim that it is unconstitutional and makes way for more criminals to enter the country.

In a statement shared to his Facebook page, Obama echoed many of the same sentiments shared by Americans everywhere:

This is about young people who grew up in America — kids who study in our schools, young adults who are starting careers, patriots who pledge allegiance to our flag. These Dreamers are Americans in their hearts, in their minds, in every single way but one: on paper. They were brought to this country by their parents, sometimes even as infants. They may not know a country besides ours. They may not even know a language besides English. They often have no idea they’re undocumented until they apply for a job, or college, or a driver’s license.

Truly, DACA is a program for dreamers, and ending it isn't the answer. Hopefully, Congress will use this window of opportunity to find a way to protect those affected by Trump's decision, and help any other DREAMers who need and deserve those same protections.