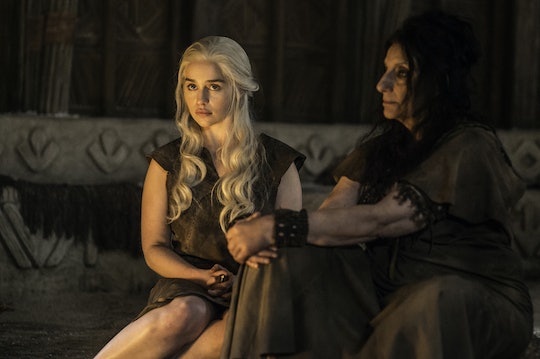 Is Daenerys Immune To Fire All The Time On 'Game Of Thrones'? The Show Has Different Rules

In the fourth episode of Game of Thrones' sixth season, "Book of the Stranger," Daenerys Targaryen illustrated once again what has gained her so much attention both in Westeros and from fans of the show. In a bout of dramatic showboating, Dany set a yurt full of Dothraki khals aflame and burned them all alive while she herself emerged naked, triumphant, and unburnt. This isn't the first time Dany has shown a remarkable resistance to fire, but it's something that's always in contention for fans. Is Dany immune to fire all the time on Game of Thrones?

The world of the show can be different from the world of the books despite using them as source material. Many of the same events have occurred in both, even relating to Dany's fire invincibility, but author George R. R. Martin has gone on the record as saying fire immunity is not Dany's secret superpower. The show hasn't stated any such thing, leaving things much more up to interpretation, but because the show has never made a judgment call on Dany's special skill, it certainly seems like she just happens to be fireproof at all times. So what exactly is the truth here?

The evidence in the show is pretty hard to ignore: Dany can withstand scalding water, pick up burning hot dragon eggs without a wince, walk through Khal Drogo's funeral pyre, get real close to her dragons' flames, and now burn the house down without receiving a single mark on herself. In the books, it's somewhat less clear. Dany may seem to have a high heat threshold and she does survive both Drogo's pyre and Drogon's fiery breath, but she also suffers some burns in the latter case. It's also implied that surviving the funeral pyre was about a confluence of events that included the birth of the dragons and the blood magic involved in Dany burning the witch Mirri Maz Duur.

In an online Q&A back in the dark ages of the Internet, 1999, GRRM answered a fan's question on the matter fairly definitively.

Granny: Do Targaryens become immune to fire once they "bond" to their dragons?

George_RR_Martin: Granny, thanks for asking that. It gives me a chance to clear up a common misconception. TARGARYENS ARE NOT IMMUNE TO FIRE! The birth of Dany's dragons was unique, magical, wonderous, a miracle. She is called The Unburnt because she walked into the flames and lived. But her brother sure as hell wasn't immune to that molten gold.

Revanshe: So she won't be able to do it again?

A few things of note here, semantics-wise: fan Granny asks if Targaryens are immune to fire (particularly after dragon-bonding) and GRRM says they're not, using Dany's brother Viserys as an example. He says Dany's impressive dragon birth was a one off thing, but he doesn't actually, explicitly state that Dany herself does not have some extra fire immunity. It may not be a Targaryen quality but simply something special and unique to Dany for some reason that hasn't yet been revealed. Like, perhaps, that Dany is the prophesied warrior Azor Ahai reborn.

On the show, Dany's ability to withstand the flames seems like it's here to stay. In an interview with Entertainment Weekly, showrunner D.B. Weiss referred to it by saying: "You know from the first season that, as you say, it’s her 'superpower,' but this is not really that type of story."

Whatever the rules are that govern Dany's ability to live through fire, it has proven itself a very useful talent to have.